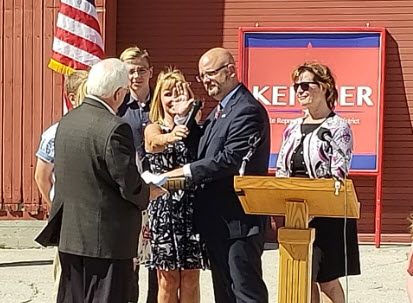 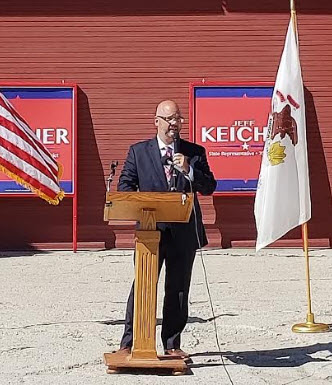 With the backdrop of an old red barn (circa 1837), on Tuesday, July 17th,  former Judge John Countryman administered the Oath of Office to Jeff Keicher to become the newest State Representative for the 70th District of Illinois.

The audience was fill with local, regional and state Republicans as well as many well wishers, family and media. Jeff Keicher has replace Robert Pritchard who resigned early to accept an appointment on the Northern Illinois University Board of Trustees.  New Representative Keicher made a brief acceptance speech, and stated he would not make promises, but would make a strong commitment to help right a listing state with hopes to make inroads to fix the many budget problems that exist within all state agencies.

Jeff Keicher is a local DeKalb County Illinois Businessman with an insurance office in Sycamore, Illinois. He had already become the candidate for the fall election to run for the 70th District position with the Republican party.