The Representative Committee consisted of the Republican Party chairs of Boone, DeKalb and Kane Counties which make up the 70th District.

In announcing the selection, DeKalb County Central Committee Chairman Tim Bagby of Sycamore mentioned the need to keep the continuity of service in the 70th District and praised Keicher’s qualifications.

“Jeff Keicher’s service in the community and his knowledge of the issues confronting the 70th District make him not only a good candidate but an outstanding choice to be Bob Pritchard’s replacement.”

Keicher’s status as the party nominee was a significant factor in his selection. “Jeff’s been on the trail, listening to the voters. He’s interested in serving the district and doing the hard work of campaigning, and he is blessed with a contagious optimism for this community and for this state.”

Keicher will officially become a member of the 100th General Assembly when he takes the Oath of Office. 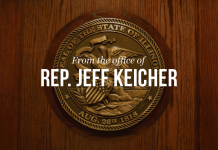 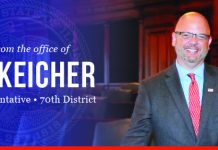