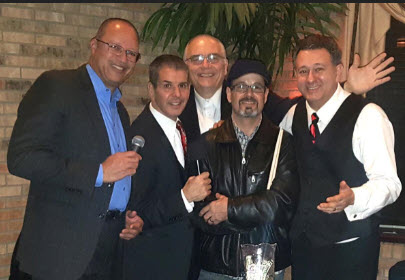 On Wednesday, July 25 at 7:00 P.M. the Ellwood House Museum, the DeKalb Park District, FunME Events, and Kishwaukee Fest will present ‘Rat Pack at the Mansion,’ the fourth installment of the seven-part ‘Music at the Mansion’ summer concert series. The performance is open to the public and free to attend. Pre-show act will begin at 6:30 P.M. at the front of the historic Ellwood mansion.

The concert will feature the Chicago Rat Pack Tribute Band, of the Midwest’s best tribute bands. The band’s repertoire includes many of the hits from the original group plus a variety of love songs and ballads that will make the audience want to get up and dance. Led by Big Band leader Frank Rossi and featured vocalist Tommy Panici, the group will take the audience on a musical journey of many of the title songs that made the group famous.  Frank Rossi is a 2010 recipient of the Order Sons of Italy Leonardo da Vinci Award of Excellence in Performing Arts. Other Band members include the very talented drummer/singer Mike Vittori who will delight the audience with his tribute to Frankie Valli, and the smooth sultry voice of Don Sloan.

The original Rat Pack was a group of entertainers who achieved massive success in the 1950s and 60s. The coolest ‘cats‘ of all time, the Rat Pack had different variations of members through the years, but the most famous were the early 1960s version led by Frank Sinatra, Dean Martin, and Sammy Davis, Jr. Their concerts were sold out as they sang hits from the 40’s, 50’s and early 60’s. Songs included: “What Kind Of Fool Am I”, “New York New York”, “You’re Nobody Till Somebody Loves You”, “My Way”  and many others.

Concert attendees are welcome to bring food and are encouraged to bring a lawn chair or blanket for seating on the mansion’s front lawn. Beer, wine, soda, and water will be available for purchase by Fatty’s Catering of DeKalb. ‘Rat Pack at the Mansion’ is sponsored by the Joseph Koch Family and the Doug Johnson Family.

The ‘Music at the Mansion’ series features performances on select Wednesday evenings throughout the summer. All concerts begin at 7:00 P.M., are open to the public, and are free to attend.

The Ellwood House Museum is located at 509 North First Street in DeKalb. On-site parking at the museum is limited. Guests are encouraged to utilize legal street parking near the museum or the public lots just a few blocks away in downtown DeKalb. The museum is operated by the nonprofit Ellwood House Association in conjunction with the DeKalb Park District.

For the complete series schedule or for more information, please visit www.ellwoodhouse.org or call 815-756-4609.