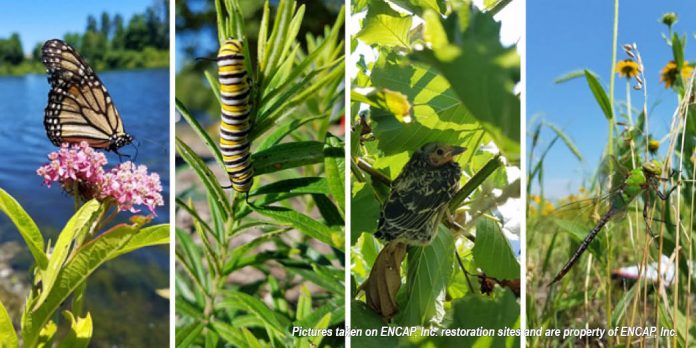 In the coming weeks and months, the DeKalb Park District, in conjunction with ENCAP Inc., will begin implementing the Nature Trail Restoration Plan.

PHASE 1 includes the removal of woody and invasive and undesirable plant material. The District recognizes that during PHASE 1, areas being restored may not be aesthetically pleasing.

The District is confident that the end results will produce a beautiful trail corridor to be enjoyed by residents for decades to come. In addition, animal, bird, and bug species will flourish along the trail!

In November 2017, the DeKalb Park District approved a plan for restoration work to be done on the DeKalb Nature Trail. The plan calls for the removal of undesirable and invasive species, as well as introduction of high quality native species that will improve the overall quality and ecological function of the plant communities. It will provide habitat for birds and butterflies in the heart of our community.

The plan calls for existing open area vegetation to receive selective herbicide application treatment to non-native and invasive species. These areas will receive supplementary seeding and small tree and shrub plantings will be installed to coordinate with existing shrub plantings. The seed mix will include a diverse mix of native grasses and flowers with various colors and blooming times throughout the year. In the area along the shoreline the seed mix will be a mix that will be dominated by native grasses that will assist with soil stabilization in erosion-prone areas.