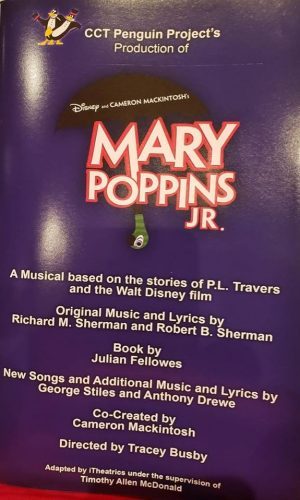 For one magical weekend, the DeKalb District 428 High School Auditorium was transformed into the “DeKalb Centre for the Performing Arts.” This weekend, the Penguin Project presented a very wonderful version of “Mary Poppins Jr.”

The Penguin Project is part of a nationwide program to make theater available to many young people and adults that are never given a chance at being on the stage. The performers may be challenged in a variety of ways, but challenge the audience to accept them as true actors, performing a role of a lifetime.

This version of “Mary Poppins Jr.” was outstanding, with the actors and mentors given a standing ovation at the end of the show. The performers gave a standing ovation to the crew, directors, mentors, sponsors and  caring people who gave hours and hours, weeks and weeks of time to make this show happen.

Professional Note:  As a theater and music professional, I admire the work of the Penguin Project. This is not my first experience seeing these productions, but this production was one of the special and well done shows. I was a guest of a local DeKalb family (Mr. and Mrs. Kaczmarczy) whose daughter is deaf. These families are proud of their family member and they are the ones deserving “5 Gold Stars” for giving their time and efforts to allow their family members an experience of a lifetime.

“Since 2010, CCT’s Penguin Project has given children and adults between the ages of 10-22 with disabilities the opportunity to step to center stage and shine in Broadway-style musical productions.

“At the heart of the program is a partnership between those individuals (our Artists) and peer mentors, who spend months working side-by-side with our artists to learn songs, dance, dialogue and more. When the curtain goes up, the artists step into the spotlight and shine, confident in the knowledge that their mentor is there to assist them.

“Throughout the process, our artists have gained confidence and poise and developed talents that many people never imagined they had. Our mentors have also benefited by developing leadership skills and learning to see others for their abilities rather than their disabilities.

“Penguin Project organizational meetings are typically held every April, with rehearsals running from May into September. Penguin Players stages two shows a year, one running from September through December, another from January through April.”

The next production of  CCT’s Penguin Project will be “The Wizard of Oz” in April of 2019.

Watch their web page, http://www.cctonstage.com/penguinproject.html, or the Children’s Community Theatre of DeKalb Facebook page for more information. You can also email the Penguin Project at CCTPenguins@Gmail.com with questions.

Below is a WGN news report about their first ever opening night. 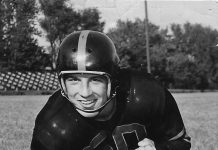