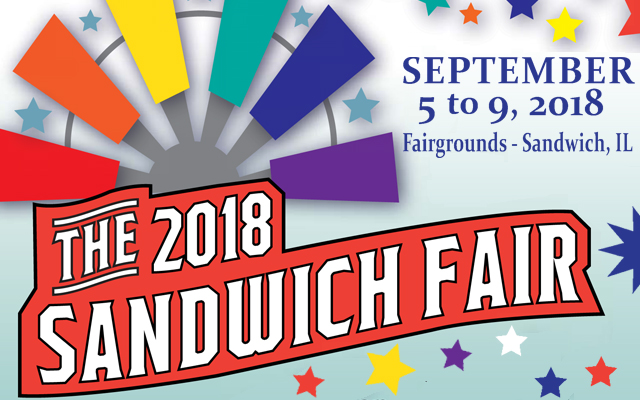 The 131st Annual Sandwich Fair kicks off tomorrow and any way you look at it, it is one of the biggest events of the year in DeKalb County.

True to its agricultural roots, the Sandwich Fair provides large numbers of agriculture exhibits and competitions, in addition to commercial exhibits, food, entertainment, carnival rides, and games for all ages. Entertainment includes horse shows, harness racing, tractor pulls, demolition derby and musical acts. This year’s headliners are country star, Justin Moore, and contemporary Christian band, Carrollton. There is even a worship service on Sunday morning at 8:30 a.m. at the Fair.

Although most people refer to it as the “Sandwich Fair,” it is actually the DeKalb County Fair. You could also say it is the “Somonauk Fair,” “Hinckley Fair,” or even the “Plano Fair,” since all of the nearby communities are so heavily involved in not just attending the fair but planning, preparing and volunteering for the huge, five-day event as well.

And running the fair is a huge job. The 185-acre tree-lined grounds are filled with many buildings that require maintenance. The Fairs draws approximately 175,000 attendees over the five days. There are 25,000 exhibits of livestock, agricultural products, arts & crafts, and collections (more exhibits than some state fairs).

They have people come from all over the state and country, including families who have attended annually from places as far away as Utah.

You can purchase everything at the Fair from corn dogs and elephant ears to campers, garages, waterfalls, paintings, cement dogs, and pillows filled with soybeans. There is everything you’ll need from birth to death—from plush toys to kitchen cabinets to tombstones.

The Fair organizers try to maintain the old-fashion feel of the event, while also introducing new things every year.

“I do hear the complaint every now and then, ‘I’m not going back. It’s the same thing year after year,’” said Sandwich Fair President, Larry Dannewitz. “Then about five years later they come back and go, ‘Boy, you’ve changed everything.’”

* The Sandwich Fair is the oldest continuing county fair in Illinois (131 years and counting), but it actually started even earlier. It originally began as the Union Agricultural Institute in October of 1858. It was renamed the Sandwich Agricultural Institute the following year. In 1884, the fairgrounds were sold and the event was disbanded. Over the next several years, a county fair was held in Sycamore. In 1888, some of the original organizers repurchased the fairgrounds, changed the fair into a four-day event in September, and the rest is history!

* When they repurchased the fair grounds and restarted the fair in 1888, 100 shares of stocks were sold for $50 each in order to finance the project. There are still only 100 shares of stock in the Sandwich Fair and they are an extremely valuable commodity. The shares are not sold, but handed down through families across multiple generations. In order to be on the Sandwich Fair Board of Directors you have to own a share of stock.

* Water was supplied by windmills, until pipes were installed on the fairgrounds in 1898. The multi-colored windmill remains the symbol of the Fair.

* Twenty large trees are planted every year to ensure that the grounds are well-shaded.

* They are one of a small number of county fairs that still don’t sell alcohol on the grounds. That fact contributes to the Sandwich Fair being one of the most family-friendly, large-scale events you can attend.

* The Sandwich Fair has its own museum on the grounds. The dark-green building that it’s housed in is the former Secretary’s Office and is the only air-conditioned building for Fair spectators (good fact to know when it’s hot outside). In the museum, you can view a DVD showing past fairs, so you see what it looked like in years gone by.

* The Fair has an official historian, Joan Hardekopf, who helps put together the exhibits in the Fair museum and also worked on two books about the history of Sandwich and the Fair.  The Sandwich Fair Since 1888: DeKalb County, Illinois is a 325-page hardcover book published in 2001 that was a project of the Sandwich Fair Association. Hardekopf also authored Sandwich: Images of America, which was published in 2008 to celebrate the 150 year anniversary of the town.

* The Fair also has its own newspaper, the Sandwich Fair Times, which has been published annually for forty-two years. The current writer of the publication, Mark Harrington, is a fourth-generation stockholder who was a public school teacher for 32 years. He attended his first Sandwich Fair when he was only one-month old.

* The Somonauk Branch of Resource Bank has a Sandwich Fair theme, featuring a windmill outside (the symbol of the Fair) and a large mural depicting the fairgrounds inside the lobby, painted by Eulojio (Joe) Ortega, a local artist who grew up in Sandwich. They also display posters and other memorabilia from the Fair inside the bank.