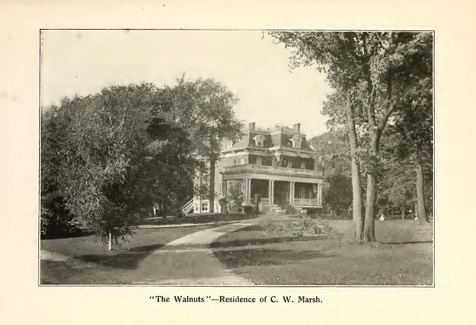 145 years ago this evening, on October 23, 1873, Joseph Glidden invented barbed wire at his farm, now the Glidden Homestead and Historical Center.

This excerpt below appeared in Farm Implement News in April 1887 (Vol. VIII. No. 4). It is one of the most detailed accounts of Joseph Glidden’s development of his most influential invention.

An unsigned article, “Story of Barb Wire and Its Invention,” is written by Charles W. Marsh, the editor of Farm Implement News. Marsh, a long-time friend of Glidden’s, invented the Marsh Harvester with his brother William. Later, he made DeKalb his home and, in 1910, wrote his memoir, Recollections, 1937-1910.

Note: In the span between 1873 and 1887, they accidentally shift the date from October 23, when the event recounted in the article happens, to October 27 (which is incorrect).

In 1873 Joseph F. Glidden then of the mature age of sixty years, a prominent farmer and stock-raiser of De Kalb county, Ill., had been terribly annoyed by cattle breaking through a fence of smooth wire and a board at the top. They (the cattle) had exhausted his patience and all his ordinary resources. He drove sharp nails through the boards and that determined him to barb the wire. He saw that if he could successfully accomplish this he could control his unruly cattle; but it was a difficult problem. Mr. Glidden had—what above all things is required for a practical invention—experience; he knew what unruly cattle were and what a fence must be that should hold them. He wanted what would answer his purpose; hence he went at it with singular directness. He proved the truth of the old saying that “necessity is the mother of invention.” He thought of several plans, rejecting one and another until at last the right one occurred to him. He came in from his work one day—it was the 26th of October, 1873—a little before dinner, and went down to an old house in the yard (it was the one he had occupied in pioneer days) where he had some No. 9 fence wire, and there made his first attempt to put his plan in execution. He found at once that he could not twist that size wire into barbs, so after dinner he went to De Kalb village (then), and got some No. 18 wire, nippers, etc. With these he returned and began operations. He experimented a little in twisting to see how it could be done; then he fastened the ends of the two wires to the side wall of the old house, brought in a grindstone and attached the other end to the treadle end of the crank, drawing the wires taught and parallel, ready for the barbs and twist. Taking an end of the No. 13 wire he twisted it with his fingers twice around one of the wires so as to form a hub or wide bearing—letting the end project; then he cut it off at proper length, and the first two-point standard barb was made and attached. He continued the operation until the strand had sufficient barbs; just then Mrs. Glidden came in to see what he was doing, and took her part in an act that marked an epoch in the development of this country, by turning the grindstone which twisted the wires while Mr. Glidden steadied them and kept the barbs in place. And thus was the first piece of practical barb wire made—the prototype of the Glidden-Ellwood barb as made to day, and the first step was taken in the great progressive movement by which the system of fencing has been revolutionized. Into what enormous proportions has the little ball grown that husband and wife started rolling that pleasant fall afternoon! It was like the first spadeful of earth on a railroad to reach across the continent. Little did they dream that they had discovered the source, the beginning of a vast stream of wealth and public benefaction.

Next day—October 27, 1873—he went to Chicago and employed an attorney to file application for a patent.

[The first and earliest document of importance relating to Glidden’s barbed wire patent #157,124 was written 145 years ago tomorrow.

The letter, announcing the “matter of application for patent for Improvement in ‘Wire Fences,’” is dated October 24, 1873. It is written by Chicago patent attorney George L. Chapin who will go on to patent several devices of his own, including two kinds of fire extinguishers and venetian shutter slats. Chapin is named as one of the witnesses on the final patent description.

The patent office in Washington, DC received the letter on the 27th—only 3 days later—along with the patent specifications and a drawing of the invention. The letter doesn’t mention the combined oath and power of attorney (shown here) that Glidden also drafted that day and was likely included. Also included was a $15 treasury certificate (that, adjusted for inflation, would be the equivalent of $290 today). When the patent is finally approved on November 24, 1874, October 27 is considered the original filing date.

Charles W. Marsh’s 1887 Farm Implement News detailed account says that Glidden went to Chicago on October 27, 1873, the day after he’d arrived at finished form of what would be known as Glidden barbed wire, having finally solved the design issues he’d been working on since that summer. But Chapin letter indicates that the highly specific sequence that Marsh related happened 3 days earlier, on a Thursday rather than on a Sunday.

The National Archives has 60 images, front and back, of original documents related to Glidden’s original patent available online at https://catalog.archives.gov/id/302051. The collection of documents speaks to the prolonged and complex effort that Glidden endured to get his invention patented and to defend that patent.]