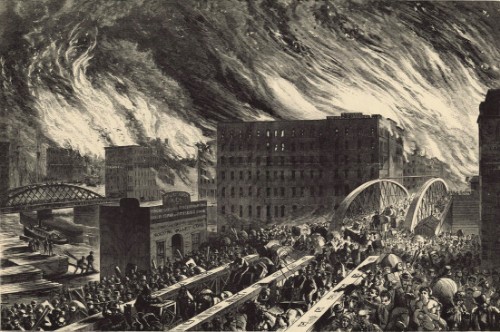 “Chicago is on Fire” would have been the local headline 147 years ago today, when the growing business town faced an enormous set back in its history.

The Great Chicago Fire of 1871 burned the city to the ground starting on the night of October 8. The fire burned wildly throughout the following day, finally coming under control on October 10, when rain gave a needed boost to firefighting efforts. It destroyed thousands of buildings, killed an estimated 300 people and caused an estimated $200 million in damages. A legend has it that Mrs. O’Leary’s cow kicked over a lantern in a barn and started the fire. Others believe that humans, lightening strikes or even a meteor might have been responsible for the event.

The same night as the Great Chicago Fire, a fire broke out in Peshtigo, Wisconsin, destroying the town and more than 1,000 people perished.

The Chicago Fire left an area of about four miles long and almost a mile wide of the Windy City, including its main business district, in ruins. Following the blaze, reconstruction efforts began quickly and spurred great economic development and population growth. Some historians say the Great Chicago Fire helped grow the modern Chicago.

But Chicago has been plagued by many fires in its history, starting first with the burning of Fort Dearborn on August 16, 1812 by the Potawatomi Indians and the killing of more than 60 soldiers, women and children.

The deadliest theater fire in U.S. history occurred in December, 1903 at Chicago’s Iroquois Theater, killing more than 600 patrons (mostly women and children) attending a sold out Wednesday matinee performance. The theater had been declared fireproof upon its opening only a month earlier. (The current Oriental Theater now rests on the same site.)

The second biggest fire in Chicago history, size-wise, was the burning of the Chicago Stock yards on May 19, 1934, which scorched an area of approximately 80 acres.

On December 1, 1958 as classes were about to end, a fire broke out at Our Lady of the Angels school, killing 92 children and three nuns. This tragedy was made worse by the fact that many parents were waiting outside for the students and could not do anything to help them survive the fire.

In review of all these events, rebranding the city’s slogan from “The Windy City” to “Hot Time in the Old Town Tonight” might be appropriate.

October is National Fire Prevention Month, a time when we should all be aware of ways to help learn fire safety and prevention. While the main focus of National Fire Prevention Month is on preventing residential fires, it is also a good time to revisit workplace fire safety and prevention. Changing batteries in smoke detectors and reviewing fire safety measures is also important. The DeKalb and Sycamore fire departments offer safety tips for home and business owners.