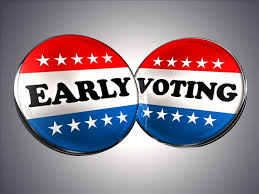 Early voting in DeKalb County ramped up on Monday with the opening of all four satellite sites, in addition to the Sycamore site that has been open since September 27.

DeKalb County Clerk, Doug Johnson, who is the Chief Election Officer for the County, said that early voting has thus far been on par with previous elections, if not a little bit busier. He gave several reasons for the early voting activity:

“For a long time, there have been people who said, ‘I’m old school; I’m voting on election day,'” said Johnson. “It’s taken theme a long time to get past that.”

Johnson also believes some voters are fed up with how nasty the Governor’s race is, with two billionaires running lots of negative TV ads. Some people may just want to vote and be done with it.

One issue that has come up more often lately, according to Johnson, is voting by mail. J.P. Pritzker’s campaign has been sending out vote by mail applications with Secretary of State Jesse White’s name on them, encouraging people to cast their ballots that way. Johnson wants to make sure people understand that if they vote by mail they can’t vote again on election day.

Johnson said he and his election workers keep track of when they get a vote by mail application, when they send out the ballot and when they get them back. If people try to come in to vote on election day after mailing in their ballots, they won’t let them.

“It really confuses the voters,” said Johnson. “We had one person send in four vote by mail applications. It doesn’t work that way here in DeKalb County.”

Other than that, Johnson said that everything is going the way it should be and the nice weather has been making it easier for people to go out and vote early.

“I think people don’t realize how much the weather has an effect on voting,” said Johnson.