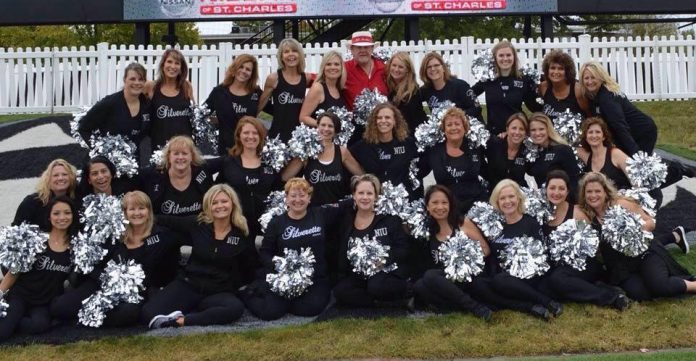 The Northern Illinois University Silverettes and Alumni Silverettes will be featured at the NIU Homecoming Halftime show on Saturday, October 13.

The Silverettes were created in 1975 and were part of the Northern Illinois University Show Band, which was a two-semester program performing at NIU Football games in the Fall and Basketball halftimes, major parades and special events in the Spring semester. The creator of the NIU Silverette Squad was the newly-appointed Marching Band Director, Michael Th. Embrey. Mr. Embrey came to NIU in the fall of 1974 to re-start the University Marching Band program and created the new contemporary-style university Marching Band, Pep Bands, Silverettes and Flag Corps.

The growth of the tradition of Silverette Alumni returning for Homecoming started five years ago through the encouragement of one of the first Silverettes, Lin Bayer. Bayer danced in 1975 and has been returning to DeKalb every year for the past five years from her home in Central Georgia. She is heavily involved with the Alumni Band & Silverette Council.

This year, 50 ladies will suit up in silver and black outfits and dancing shoes, ready to dance and kick the routine designed by current NIU Silverette Coach, Lisa A. Morreale.
The Silverette alumni returning this year range in age from 24 to 63 years young … and yes, they can still kick. They come from across the county to be part of the homecoming half-time show. From the DeKalb area alumni, Peg Brown Sauser and Marissa Kafka, to Cyndi Chally from Northern California, the Silverette alumni hail from 12 different states.

The show will feature two sisters who marched in different years, Diane Lindholm (1981-83) and sister Danette Lindholm (1985). 2016 Silverette graduate, Brandie Bockwoldt, is now working on her graduate degree at the University of Washington and is Assistant Dance Choreographer with another former Silverette Captain, Kathy Noonan (1978). Another Silverette graduate, Rachel Jacob (2017), didn’t go far as she is doing graduate studies at the NIU Law School.

Once you graduate as a Silverette, what is in your future? Many of the Silverette Alumni have gone on to very successful careers. These careers and professions include:
International Flight Attendants , Elementary and Secondary Teachers, Athletic Directors, Real Estates Brokers, Nurses, Educational Administrators, Medical Technicians, Theater/Dance Instructors and several Business Owners. And yes, professional dancers … having a couple Silverettes perform with the Chicago Honey Bears and Dallas Cowboy Cheerleaders.

Last year at the conclusion of the Homecoming Halftime show, a young girl (about 9 years old) ran to the front of the stadium as the Silverette alumni were leaving the field and shouted, “Great job, Grandma!” You are never too old to kick up your heels.