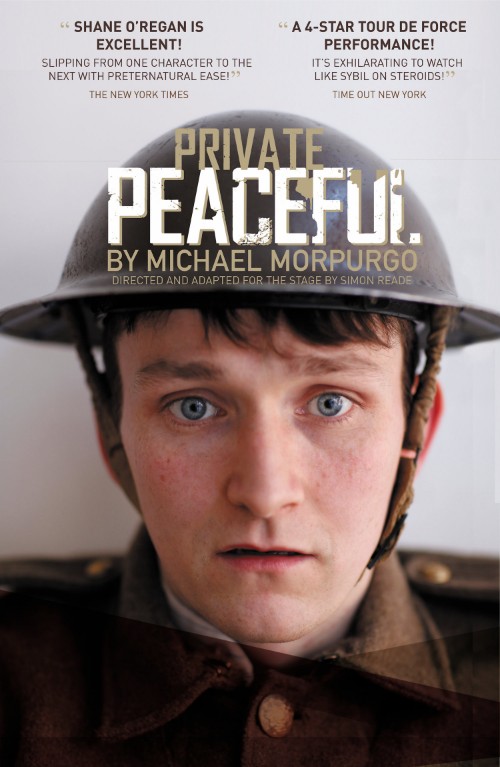 DeKalb County Online, FunME Events and The Nice Society present a special day at the theater for veterans, current military and friends. For a limited run, see the compelling story of “Private Peaceful” at The Greenhouse Theater Center, located at 2257 N Lincoln Avenue in Chicago. “Private Peaceful” is a timely reminder of the heroic sacrifices that were made by those involved in World War One.

The story charts the life of a young soldier, Thomas “Tommo” Peaceful, a Private played by Shane O’Regan, who faces the firing squad for cowardice. As Tommo sits in his cell waiting for sunrise, he thinks back to some of his fondest memories and reflects on the events that made him the person he is today. Tommo recounts the fact that he and his elder brother, Charlie, do everything together—reminiscing on memories from their schooldays, sleeping and eating, and facing personal problems. They even fell in love with the same girl. But now they have to face the many facets of war together.

This special show was written by Michael Morpurgo, the celebrated author of War Horse. War Horse was made into a movie and Broadway Musical and received critical acclaim.

Friends of DeKalb County Online, FunME Events and The Nice Society will receive a special pricing for this limited run show. In partnership with “Group Theater Tix“, the normal theater price of $45.00 will be reduced to $25.00 for each ticket.

Call the Box Office at (773) 404-7336 and mention the code: “supergroup” to get your special rate. The show runs through November 11, 2018. This offer is non-transferable and subject to availability.

Don’t miss this great tribute to the American Soldier!

This offering was made possible by Michael Embrey and www.Sweets4Troops.