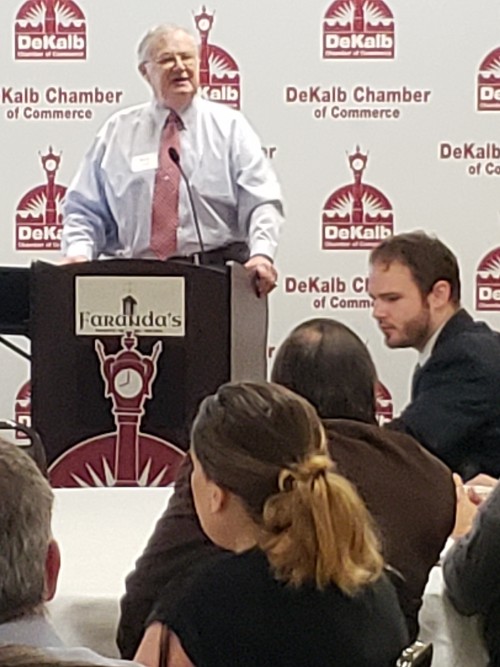 Mayor Jerry Smith spoke first and addressed a variety of recent issues including: modernization of downtown, new hotel project, North Annie Glidden project, road improvements, joint projects with a variety of agencies, increased entertainment effects of concerts at the Egyptian and Music at the Mansion (Ellwood) and needs for stronger ties with regional communities and the effects of tourism. To lighten the mood he talked about chickens in DeKalb. 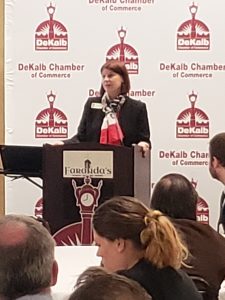 The new President of Northern Illinois University (Lisa Freeman) spoke second and made a promise to continue with stronger ties with the university and the city. She addressed the concerns of declining enrollment and lack of revenue from the State of Illinois. She also honored some of the university staff for a variety of successful projects that bring recognition to NIU. The university budget was another key point in her presentation.

Because the time of meeting and cost, this event was not affordable to many working people or business owners. The new City Clerk, Lynn Allen Fazekas, requested that this event be recorded and available with full content on the City of DeKalb and DeKalb Chamber’s web sites. Mrs. Fazekas was also acknowledged by Mayor Smith for her innovative approach to the City of DeKalb City Clerk’s position.

This was more a meet and greet with the official State of the City address happening later this year. Please check out the web sites for the complete morning program.