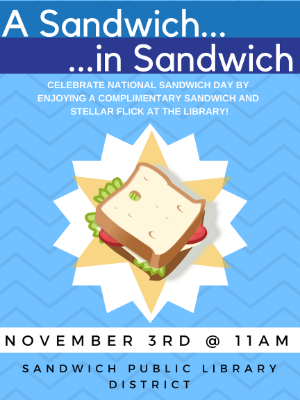 The Sandwich Public Library is inviting everyone to come and have a Sandwich in Sandwich, iL. Materials for sandwiches will be provided. Registration is required for individuals and groups.

They will also be showing a complimentary family-friendly movie to enjoy while you are eating your sandwich.

You could also enjoy a Sandwich in Sandwich at one of their local restaurants.

“National Sandwich Day is observed annually on November 3. The sandwich is believed to be the namesake of John Montagu, 4th Earl of Sandwich, following the claim that he was the inventor of the sandwich. This day honors one of America’s most popular lunch items.

“While the modern sandwich is believed to be named after John Montagu, the exact circumstances of its invention and original use are the subject of debate. There is a rumor in a contemporary travel book titled Tour to London, by Pierre Jean Grosley, that formed the popular myth that bread and meat sustained Lord Sandwich at the gambling table.  It is said that Lord Sandwich was a very conversant gambler and did not take the time to have a meal during his long hours playing at the card table. When hungry, he would ask his servants to bring him slices of meat between two slices of bread. This practice was a habit which was well known to his gambling friends who soon began to order “the same as Sandwich,” and from this, the sandwich was born.

“N.A.M. Rodger, who wrote Sandwich’s biography, suggests that because of Sandwich’s commitment to the navy, politics and the arts the first sandwich was more likely to have been consumed at his work desk.

“Before being known as sandwiches, the food seems just to have been known as bread and meat or bread and cheese.”

Go out for a sandwich with a friend.