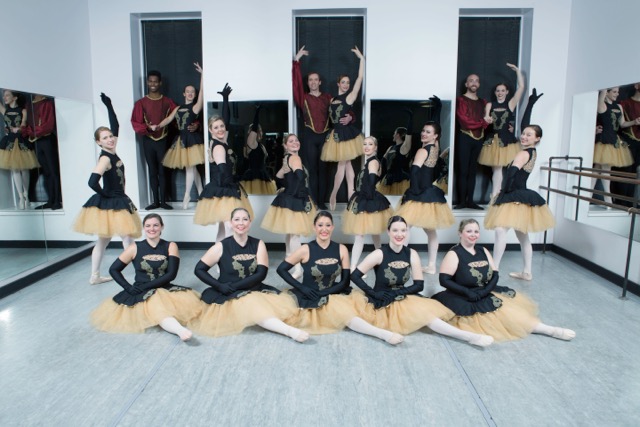 It’s not everyday people are offered the chance to step back in time, even if just briefly, to relive one of the favorite moments of their youth.

Yet, they know, if such an opportunity is offered, magic likely will be involved.

This holiday season, the dancers and artists of the Beth Fowler Dance Company and Beth Fowler School of Dance will once more herald the arrival of the season of magic and wonder as they have for the past quarter century, releasing the mystery and splendor of The Nutcracker ballet.

The holiday classic will be performed at DeKalb’s Egyptian Theatre and will then bring the production to St. Charles North High School.

This year, as the BFDC celebrates the 25th anniversary of performing The Nutcracker, the current Company dancers will be joined for one special night by a number of BFDC alumni, dancers who have lent their own talents and grace to 25 years of magic and beauty.

Johnson danced with the Beth Fowler School of Dance and the Beth Fowler Dance Company for 15 years from 1993-2008 beginning at the age of 3, and in that time earned such leading roles as Clara in the 2004 BFDC production of The Nutcracker. And in the past 10 years, Johnson has gone on to a career in theater and entertainment, performing in plays and musicals, as well as working with various television programs, including a recurring role on NBC’s “Chicago Med.”

But Johnson said it took little effort on the part of BFDC Artistic Director Beth Fowler to persuade her to again take the stage in The BFDC Nutcracker.

“I said ‘I’m in, definitely in,’” she said with a laugh. “It’s my last stab at doing The Nutcracker. How could I say no?”

Families through the years have made the production a holiday tradition, pausing for an evening to take in the beautiful dancing, costumes and stage sets, so they can all again see the holidays through the eyes of a child at Christmas.

Featured Company dancers include Emily Fox, of West Chicago, as Clara; Kaitlyn Rollo, of South Elgin, as the Christmas Fairy; Jen Flatland, of Hampshire, as the Rose Queen; and Taryn Sarto, of Genoa, as the Snow Queen.

Brady McCue, of St. Charles, will dance the role of Fritz.

BFDC alumnus and current staff instructor Lydia Carpenter will dance the role of the Sugar Plum Fairy. And guest artist Taylor Maurchie-Banks, a dance major at Northern Illinois University, will perform as the Nutcracker Prince/Cavalier.

BFDC alumnus Wade Tischauser, a frequent performer with the Company, will perform as the Snow King for all performances but Nov. 30, when the role will be danced by guest artist Larry Pool, of Rockford.

BFDC alumnus and current staff instructor Brooke Fowler will dance the role of the Arabian Queen, accompanied by guest artist Matt Skorupski, as the Arabian King.

Herr Drosselmeyer, Clara’s toymaker godfather, will be portrayed by Phil Masterton, of Rockford.

Other members of the large, local cast include Company soloists in various roles and students from the Beth Fowler School of Dance in children’s roles.

Choreography is by Beth Fowler, assisted by Brooke Fowler. Original choreography in the grand pas de deux is by Lev Ivanos.

In celebration of the 25thanniversary, the BFDC production will hold many new surprises, including new choreography, sets and props and special effects, said Beth Fowler.

And this year, the Company dancers also will be joined for the Friday, Nov. 30, performance by Callie Johnson and many other BFDC alumni from throughout the past 25 years and from throughout DeKalb and Kane counties.

“To me, it’s all about the people who made the last 25 years great,” said Fowler. “I wanted to have a special alumni performance to bring us all back to share the stage together again!”

These alumni have since gone on to a variety of professions and pursuits. Some own dance studios of their own. Others work in local schools. Still others have pursued careers on the stage and screen. Yet all said their time in the BFDC and at the Beth Fowler School of Dance has deeply impacted their lives for the better, preparing them not only to perform, but to succeed in all aspects of life.

Miranda (Simek) Cordes, 35, of DeKalb, will reprise the role of Snow Queen on Nov. 30, leading the alumni dancing in the “Snow Corps” in the Waltz of the Snowflakes. She will be joined by BFDC alumnus Larry Pool as the Snow King.

Now the owner of Dimensions Dance Academy in DeKalb, Cordes danced with the BFDC for 16 years beginning in the mid-1990s, dancing such leading roles as the Snow Queen and Sugar Plum Fairy.  She also danced professionally with Ballet Chicago, Joffrey Ballet and Joel Hall Dance Center in Chicago and Milwaukee.

She said she was “honored” to be welcomed back now to perform in the special 25thanniversary Nutcracker production.

“I am looking forward to dancing the role of the Snow Queen,” Cordes said.

“Beth provided me with a solid foundation that I was able to take into the professional world and continue my training with many wonderful, renowned teachers.  Today, she continues to be there for me.”

Fowler said the lifelong family connection between not only the dancers, but the faculty and all involved in the BFDC and BFSD, is what makes the entire program so special.

“How often does it happen that studio owners and dance educators in one community come together to share the stage?” said Fowler. “Our common bond is the BFDC. My heart is full for these dancers that are like my very own. Dance family for life. I am so proud of them!”

Jodi Riley, 41, of Sycamore, who danced with the BFDC for about 10 years beginning in the mid-1980s when her surname was Vosburgh, said she also owes much of her success to all she learned dancing with Beth Fowler.

“Had it not been for Beth’s studio, I wouldn’t have the opportunity I have today,” said Riley, owner of Performing Arts Academy in Sycamore.

When Beth Fowler asked her be part of the show, Riley said she leaped at the chance.

“It’s a great opportunity to get back on stage again,” she said. “I wanted to prove to myself I could do it.

“It hurts a lot more than it did back then,” she added with a laugh. “But we can see how dance affected our lives, and to still be able to get on stage and perform, it’s a great feeling.”

Kelly Bolander, of Sycamore, danced with Beth Fowler for 25 years, beginning when she was three years old in 1992. She continued to dance with the BFDC until 2015, and then taught at the Beth Fowler School of Dance until 2017. Currently, she serves as a coach for the Sycamore High School Dance Team, while working as a hair stylist.

“Some of the dancers that are performing in this show are dancers I looked up to when I was younger,” said Bolander, noting many of the dancers, like her, moved from the BFDC to teach dance to the next generation at the BFSD – a key facet of the BFDC that has allowed Fowler to maintain consistent excellence through the decades.

“And others are friends I want to share the stage with again,” Bolander said.

Samantha Scaccianoce, of Genoa, currently serves as the program director for the Orchesis Team at Huntley High School and is a full Company member with Outlet Dance Company. She danced with the BFDC from 2009-2012.

“After graduating from BFSD, I knew that dance always had to stay as big a part of my life as it was for me when I was in high school, and I’m happy to say that dance still is the biggest, and most important part of my life today,” Scaccianoce said. “I feel so honored to be participating in this special Alumni Performance of The Nutcracker. I volunteered to be a part of this special event because I was so excited to be able to dance with my friends from high school again, and with Beth, who has had such a prominent impact on my Dance Career, and my life.

“I am very excited to share the stage with these beautiful dancers once again. Even six years later, Beth Fowler School of Dance still feels like my home away from home.”

Courtney Scott, 31, of Sycamore, formerly of Hampshire, danced with Beth Fowler from 1998-2005. Currently, she serves as the office administrator at a medical practice, and also serves as a dance instructor at Northern Illinois Dance Center in Sycamore.

“My time at BFDC not only taught me proper dance technique, but also taught me communication, self respect, respect for others, as well as time management,” Scott said. “Which all has had an effect not only professionally, but personally, as well!”

Scott said the challenge has been real, as she can “definitely tell I’ve been out of it for some time!”

“However, I appreciate that I can walk back in and do some things like I never left.”

Some alumni will dance as members of the Snow Corps, while a still more robust company of BFDC alumni will take the stage in the Spanish Chocolate dance.

Johnson encouraged the community to again turn out to support these alumni dancers on Nov. 30, many of whom continue to live and work in the local communities, and all of whom danced for decades as part of the special holiday tradition brought to the area by Beth Fowler for the last quarter century.

“You’re going to see alumni from Beth’s original company to those who just graduated,” Johnson said. “It’s so wonderful, this thing Beth (Fowler) has built over the last 25 years, it’s such an accomplishment. I’d invite everyone out to help us celebrate.”

All BFDC alumni and audience members are invited to a special reception in the Egyptian Theater’s front lobby following the Nov. 30 performance. And throughout this year’s run of the Nutcracker in both DeKalb and St. Charles, the BFDC will offer a commemorative photographic display, allowing everyone to walk back through the past 25 years of the BFDC.

Reserve tickets can be purchased in advance, and each child’s ticket includes a meet-and-greet photo opportunity with the Sugar Plum Fairy and other performers. To purchase tickets, visit www.BethFowlerDanceCompany.com. Tickets may also be purchased at the door beginning one hour before each performance.