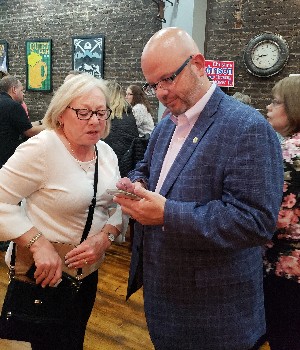 The 2018 General Election is over and all of the incumbent Republican politicians from DeKalb County survived the “blue wave” that swept across Illinois and much of the country.

Although their races were closer than they were hoping for, both DeKalb County Clerk, Doug Johnson, and 70th District State Representative, Jeff Keicher, feel good about the campaigns they ran and are optimistic going into their new terms.

Johnson said that he showed you can run a clean campaign and still win. He believes that his competence fulfilling the duties of his office is ultimately what got him re-elected.

“[The election] went as everybody has been accustomed to having in DeKalb County—a safe, secure, trouble-free election. i think that’s why I’m still in office,” said Johnson. “Even in this election where we had a 65% turnout, everything went smoothly, accurately.”

Indeed, the turnout in 2018 was a significant increase from the last mid-term election in 2014, when only 49% of eligible voters showed up.

Johnson said the only hiccup occurred when one polling place forgot to bring in their voting machine and he had to drive out to pick it up. That ended up delaying the final tally a little while. Even so, they were almost all wrapped up by 9:00 p.m. Tuesday night. Johnson didn’t get to join the victory celebration at the Forge of Sycamore until after their usual closing time, though.

“That’s the life of a County Clerk,” said Johnson. “Sharon Holmes, who was with me, said that she’s never gotten to enjoy a celebration for herself.” Holmes served as Dekalb County Clerk for over 20 years.

Johnson did get a congratulatory call from his opponent, Carolyn Morris, which he appreciated. But she had to leave a message because he was in his car at the time.

“I was going fairly fast; I wasn’t answering my phone,” Johnson said.

His immediate plans the day after the election were to go home, have a good meal and go to bed early to recover from the long hours of the previous week.

The next thing that Johnson will immediately begin working on is setting up new voting machines for the April Consolidated Elections. The new machines, which they purchased from Kane County, are made by the same company and use the same ballots as their current ones, but are newer models.

The new machines can handle 20-times more precincts, have a larger screen that will be easier for voters to see, and have upgraded back-end diagnostic features. If a recount is necessary, the new machines can give them a screenshot of every ballot. Johnson said he is planning to sell the old machines to recover some money for the taxpayers.

The 2019 DeKalb County Consolidated Elections will include many smaller races, such as mayoral, library board and school board contests.

Johnson credits his staff for operating the DeKalb County Clerk & Recorder’s Office at a high level of proficiency and professionalism. He said they have many years of experience working in the office and really care about what they do, because like himself, they are deeply rooted in DeKalb County.

When asked by people what they could do to improve, Johnson simply says, “We’re going to continue to do the good job we’ve been doing.”

Jeff Keicher was challenged by Democrat Paul Stoddard in his race for 70th District State Representative. He believes his early start doing fundraisers and talking to people across his district ultimately carried him through. He said that the last he looked, he was up to 400 individual contributors to his campaign, in addition to party and PAC money.

“We had done a lot of data analytics in-house with the interns we were working with from NIU,” said Keicher. “We came in a little short of where we wanted to, but i think in light of the larger trends that we saw in the state-wide offices and the congressional offices, that tempers that a little for me.”

He will be going to Springfield on Tuesday to begin two weeks of Veto Session, and will start drafting legislation that is important for the 70th District and sharing it with his peers in the state legislature.

“My first priority is going to be making sure that I understand the dynamics of now being in the minority party as we go forward, and trying to work in a collaborative fashion with other members of the General Assembly,” said Keicher. “I want to make sure we are putting pieces in place where the dialogue becomes directed towards constructive progress instead of tearing people down.”

He said he is significantly opposed to one-party rule, regardless of which party it is, because he believes it creates a toxic environment—especially given the current acrimony between the two parties.`

Keicher was happy to see the DeKalb County Board maintain their 12/12 split between Republicans and Democrats.

Keicher also feels very strongly about ending gerrymandering. The first pieces of legislation he signed on to during his interim term were two versions of the fair maps amendment.

“I hear more and more about the Democrats talking about it,” said Keicher. “I think it is only fair to let the voters pick who represents them, instead of the representatives picking which voters get to vote for them.”

He said that although we may not have enough people for DeKalb County to all be within a single district, the cities should be kept together.”

“[When you split up cities], you are diminishing the impact that the members of that community can have, and their voice is diminished,” said Keicher. “And I think that is inherently unfair.”