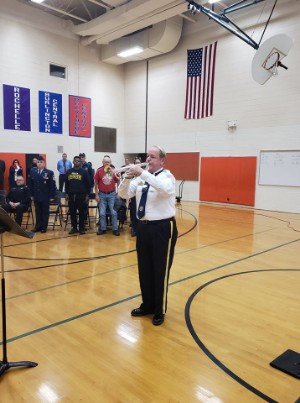 With Veterans Day approaching, several veterans from DeKalb American Legion Post 66 and members of other military organizations attended the special Veterans Day Assembly at Clinton Rosette Middle School in DeKalb, Illinois. They shared their experiences and enlightened the students about what it means to thank a veteran. The veteran and current serving military members came at the request of Principal Tim Vincent. Mr. Vincent felt it was important that the students both get to meet and hear experiences from this group as well as ask them questions. Part of the full school assembly was to learn what Veterans Day is and why it is honored as a holiday. 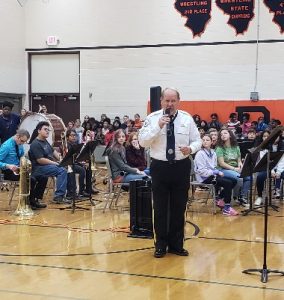 Another part of the assembly was to learn how and why Taps is played at both military funerals and military ceremonies. American Legion Bugler Michael Embrey explained the origin of Taps and how it became part of military funerals. Mr. Embrey is not only a Veteran, but is also a military Band musician, formerly with the US Air Force Band/Drum Corps. He is a a member of the Buglers Hall of Fame and has performed Taps at over 500 military funerals, including many DeKalb County veterans.

November 11th is the one day set aside each year to honor those who have served and continue to serve our nation—not to be confused with Memorial Day, the day we pay tribute to fallen service members. Veterans Day offers a great opportunity to teach civilians about the sacrifice service members and their families make year-round. 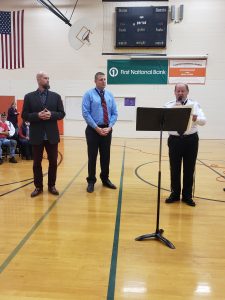 This Veterans Day, strike up a conversation with a veteran. Get to know one of them in a meaningful way. There is a wide cultural gap between Americans who have no relationship with the Armed Forces and those who’ve served their country. Closing that gap is as necessary as it is long overdue.

But the most productive thing anyone outside the military can do is actually very simple and easy. Just say: “Thank You for your service.”

There are still three local Veterans Day ceremonies happening, which people are welcome to attend: