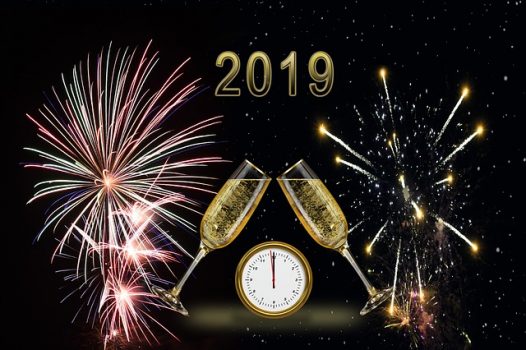 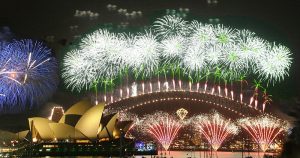 Two hours later, thousands of revelers in Sydney, Australia lined the waterfront and cheered as they watched a unique fireworks and laser light show in the sky over the city’s harbor, complete with music. Watching the New Year’s Eve fireworks display at Sydney Harbour is truly something special. After all, it’s the world’s largest pyrotechnical performance. Before the fireworks light up Sydney Harbour Bridge and the surrounding buildings, Sydney offers an assortment of traditional ceremonies, including an immaculate light parade and awe-inspiring aerial acrobatic shows.

Tokyo celebrated at 9 a.m. ET, Hong Kong at 10 a.m. ET and Bangkok at 11 a.m. Central Time on Monday. While many celebrate New Year’s Eve with fireworks and revelry, in Thailand hundreds of Thais traveled to Takien Temple in a suburb of Bangkok to lie inside coffins for traditional funeral rituals. Participants believe the ceremony symbolizing death and rebirth helps rid them of bad luck and paves the way for rebirth in the new year.

The city of “Lights” and “Love” is my favorite city to ring in the New Year. Paris is the most romantic city in the world. The French capital combines its end of the year fireworks display with a dazzling Eiffel Tower light show and a giant street party that centers around the famous Champs-Elysees. Revelers pop bottles of champagne as the night wears on and exchange chocolates that are known as papillotes. This year may not have the romance due to the turmoil in the city.

Easily one of the world’s best New Year’s cities is Edinburgh, Scotland. The castle city certainly goes all out to make the most out of its end of the year festivities. The result of these efforts is the multi-day Hogmanay celebration. One of the largest street parties on the planet, Hogmanay spans the course of four days and includes a scintillating fireworks display over Edinburgh Castle. Concerts add extra depth to the overall celebration, as do any other number of side events, and you can bet that there is lots of traditional Scottish dancing going on.

New York City is like no other city in the world and is synonymous with end of the year revelry. The city’s famous “ball drop” celebration in Times Square debuted in 1904 in commemoration of the opening of the New York Times central headquarters. It has grown into an internationally televised spectacle that features celebrities galore and hours of entertainment leading up to the ball drop. Several thousand people cram into Times Square to watch the countdown, and the ball completes its descent to the cheers of millions in person and on TV.

If you are a real party goer, Las Vegas is the place to ring out the New Year. Las Vegas throws some of the hippest New Year’s Eve parties that you will find anywhere around the globe. These events are held at the city’s exclusive bars and night clubs, featuring big name celebrities who either serve as hosts or contribute in the way of live performances. The “Vegas Strip” is closed off to motor vehicles and essentially transforms into one large street party. Come midnight, brightly colored fireworks are dynamically projected from the roof tops of some of the leading casino hotels/clubs, including the MGM Grand and Caesars Palace.