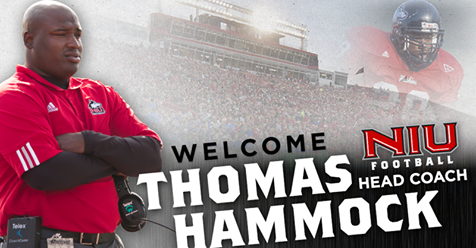 It is being reported by multiple news outlets that former NIU running back and current Baltimore Ravens Running Backs Coach, Thomas Hammock, will be announced tomorrow as the new Northern Illinois University Head Football Coach.

Hammock is in his fifth year as the Running Backs Coach for the Baltimore Ravens. Prior to that, he coached in the NCAA for eleven years, including two years at his Alma mater.

Hammock began his coaching career as a graduate assistant at the University of Wisconsin in 2003. Upon graduating in 2004 with a master’s degree in educational leadership and policy analysis, he came back to NIU and served as the Running Backs Coach for two years in DeKalb. During that time, Hammock worked with Garrett Wolfe, who led the NCAA in rushing in 2006. From 2007 to 2010, Hammock was the Running Backs Coach at the University of Minnesota. For his last year there, he also served as Co-Offensive Coordinator.

Hammock returned to the University of Wisconsin for his final college coaching stint. He was the Assistant Head Coach and Running Backs Coach in Madison from 2011-2013 before moving up to the NFL. In 2011, he again coached the nation’s leading rusher, as the Badgers’ Montee Ball racked up 1923 yards under Hammock’s direction.

As a player at NIU, Hammock was the Huskies’ leading rusher, running for over 1000 yards for two straight seasons. His senior year in 2002, he was diagnosed with a serious heart condition after rushing for 172 yards and two touchdowns in their season-opening win over Wake Forest. With his playing career abruptly ended, Hammack finished his bachelor’s degree in Marketing at NIU while tutoring future NFL All-Pro, Michael Turner, as a student coach.

Hammock played high school football at Bishop Luers in Fort Wayne, Indiana. He and his wife, Cheynnitha, have a daughter, Tierra (9), and a son, Thomas Douglas (5).