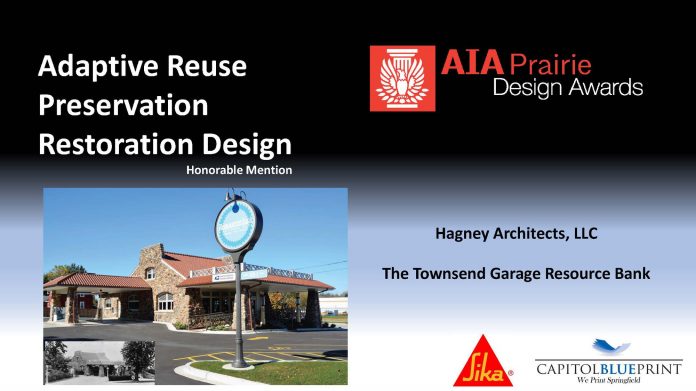 The Midweek reported last week that Resource Bank was recently given an award by the American Institute of Architects (AIA) for restoration and reuse for their Sycamore branch building.

At their 2018 Annual Meeting in November of 2018, the Prairie Chapter of the AIA gave an honorable mention award in the Reuse/Preservation/Restoration design category to Hagney Architects and Resource Bank for their renovation of the former Frederick B. Townsend Garage at 351 N. Main St. in Sycamore.

The building, which was constructed in 1906, was originally a garage for Frederick Townsend’s vehicles. Over the years, the building has served as a gas station and a restaurant, before becoming a community branch location for Resource Bank. The Townsends’ large Queen Anne style home, built around 1890, still stands near the stone structure that now houses Resource Bank, and is a part of the Sycamore Historic District.

Frederick B. Townsend, who died in 1938, is an important figure in DeKalb County history. He came from a prominent local family, on both his father and mother’s sides. His father, Amos Townsend, was a wealthy landowner and his grandfather on his mother’s side was Daniel Pierce, who started a bank that become NB&T, and later First Midwest. His parents’ mansion, where he grew up, was donated to Sycamore after his mother’s death and became a hospital (now Kindred Hospital). Townsend’s son-in-law, Thomas H. Roberts, was the founder of DeKalb Genetics.

Frederick Townsend served three terms as Mayor of Sycamore, was the Sycamore Township supervisor, served as Chairman of both the Sycamore Municipal Hospital board and the Public Library board, and was influential in the founding of the DeKalb County Farm Bureau. As a county judge, Townsend was also involved in the construction of the current DeKalb County Courthouse in Sycamore.

For the renovation of the Townsend garage, they were guided by photos from when the building served as a gas station, and added antique gas pumps in the front of the building to enhance that motif. They used original materials as much as possible, and similar materials for the building’s addition and drive-up canopy.

Resource Bank has a history of reusing historic structures for their local branches. Through the years, the bank has expanded to its current size of ten offices throughout DeKalb and Kane Counties, and in designing and constructing these branch buildings they have tried to relay the idea that the bank intends to be good stewards of the communities where they are located.

Following is a rundown of the Resource Bank branches that are housed in buildings with historical significance.

At their Shabbona branch at 102 S. Indian Road a one-room schoolhouse—the Quilhot School—was moved there and restored for use as a community room. Hagney Architects, Shepard Construction and Resource Bank won a Merit Award for Design in the Commercial category from the Association of Licensed Architects (ALA) in 2017 for their Shabbona Branch Building.

Likewise, their Hampshire branch at 135 W. Oak Knoll Drive also has an historic schoolhouse on their property that functions as a community room. The 1859 Eakin one-room schoolhouse was moved from Rutland Township and attached to the bank in 2015.

The Somonauk Branch at 605 E. Market St. has a Sandwich Fair theme, featuring a windmill outside (the symbol of the Fair) and a large mural in the lobby depicting the fairgrounds. The mural was painted by Eulojio (Joe) Ortega, a local artist who grew up in Sandwich. Posters and other memorabilia from the fair are also displayed throughout the bank.

Their Malta branch building at 201 State Route 38 has limestone accents, galvanized grain bins and board-and-batten siding, which are meant to reflect the functional architecture of surrounding farms and the importance of the agricultural community.

Even the Resource Bank branch buildings that don’t have specific architectural significance still reflect their dedication to the local communities. For example, their new Leland branch is a temporary facility that was put in place as quickly as possible when they learned that the bank in town was closing its doors. 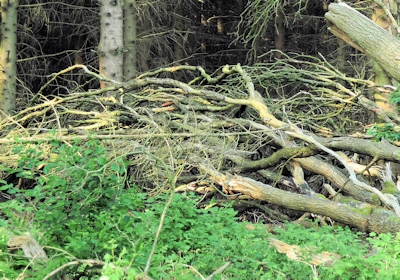