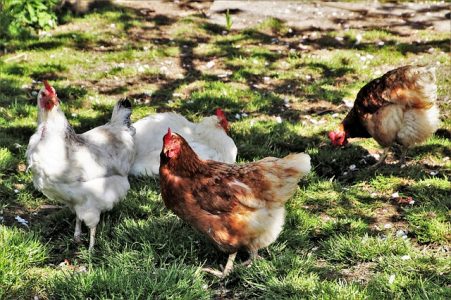 The Town of Cortland recently posted the following announcement on their official website:

“The Town has been receiving complaints about chickens (hens and roosters).  The Town’s Municipal Code states that farm animals, including chickens, are not allowed in residential zoned areas. After receiving a complaint staff will review the specifics of the complaint. Should it be determined that the complaint is valid then the property owner will be notified that they are in violation and will be given an opportunity to correct the situation. Those who fail to comply may be assessed fines.”

Meanwhile in DeKalb, there is an effort by residents to amend the municipal code to allow backyard chickens (hens only). This isn’t the first such attempt. Back in 2012, DeKalb resident Hannah Dwyer gathered 400 signatures on a petition and brought a proposal to the DeKalb City Council, who ultimately voted it down.

There are currently two Facebook pages dedicated to promoting backyard chickens in DeKalb, IL, and there have been at least two community meetings to address the issue. Furthermore, on February 8, 2019, Clare Kron made a presentation to the The Citizens’ Environmental Commission of DeKalb about backyard chickens (i.e. “sustainable urban food system”).

There is now an online petition on moveon.org trying to get 200 signatures to deliver to the DeKalb City Council.

From the moveon.org petition –

“We support the right of DeKalb, IL residents to responsibly own backyard chickens

“Many suburbs surrounding DeKalb allow residents to raise a small number of chickens for a healthy source of eggs (including Naperville, St. Charles, and Batavia). Everyone should have the right to know that their eggs come from healthy and cared for chickens that are free from hormones and antibiotics if they choose.

“DeKalb citizens should have the right to responsibly own backyard chickens on their own property as pets or as a healthy source of eggs. The City of DeKalb should not have control over what we do on our property as long as it does not cause a nuisance to neighbors.”