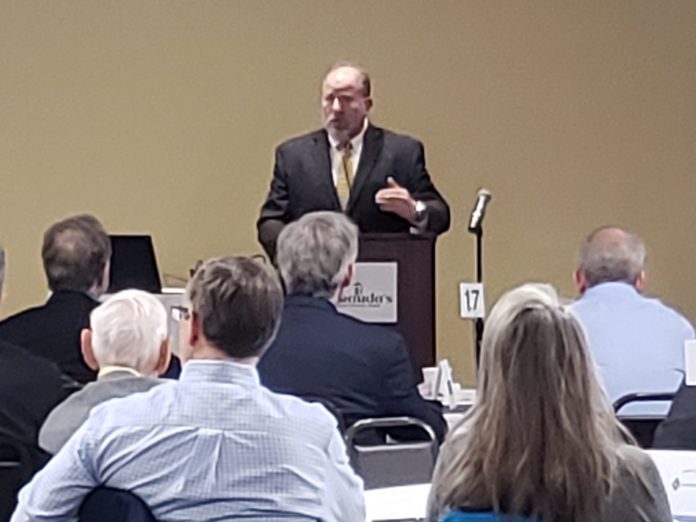 On Thursday, April 11, 2019, the DeKalb County Economic Development Corporation (DCEDC) held its annual Economic Outlook Luncheon at Faranda’s Banquet Center in DeKalb. Senior Economist William A. Strauss of the Federal Reserve Bank of Chicago delivered an insightful presentation regarding the outlook of our economy. 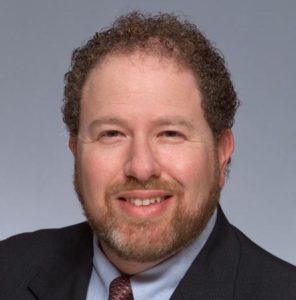 Bill Strauss is a Senior Economist and Economic Advisor in the Economic Research Department at the Federal Reserve Bank of Chicago, which he joined in 1982. His chief responsibilities include analyzing the current performance of both the Midwest economy and the manufacturing sector, for use in monetary policy. He organizes the Bank’s Economic Outlook Symposium and Automotive Outlook Symposium. In addition, he conducts industrial and manufacturing roundtables throughout the year.

The Event Chair was Gary Evans, who opened the presentation. The keynote speaker spoke to the attendees on the economic status of the country, which was more positive than Mr. Strauss’ last presentation in DeKalb County. His presentation was full of some very optimistic projections for the future. This included inflation, workers compensation, employment and the stock market. 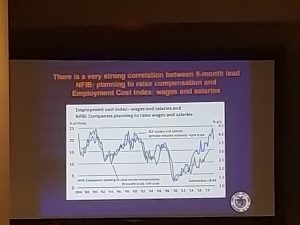 The crowd was a bit smaller than the last “economic outlook luncheon,” but they left with a good feeling about the overall direction of the country and economy. Strauss commented that the current stock market rally is now the longest in history, and its current position looks positive. Employment is strong and some companies are rewarding workers’ productivity with higher salaries. 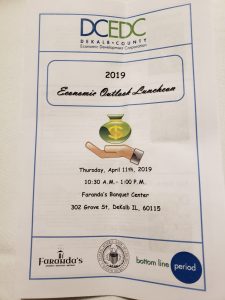 Some other issues addressed but not reviewed due to the time limitation of the program included long-term problems for the US, such as stagnation of wages for lower-income families, inadequate investment in deteriorating infrastructure, rapidly rising medical and pension costs of an aging population, energy shortages, and sizable current account and budget deficits. Pensions continue to be the elephant in the room among concerns.

Although Mr Strauss was reluctant to discuss at length the economic problems in Illinois, he did feel the direction of the state and current economic decisions would force the state to end up with junk-bond status.

The event ended with DCEDC Executive Director, Paul Borek, reflecting on both current and future trends for DeKalb County.