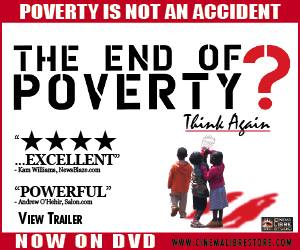 After fulfilling your civic duty by voting on Tuesday, April 2nd, improve your social consciousness by heading over to the Egyptian Theatre in Downtown DeKalb for a free screening of The End of Poverty? at 7:00 p.m.

About The End of Poverty?

Filmmaker Philippe Diaz sets out to get a complete and researched understanding of poverty throughout the world. Through the film, he interviews a litany of policymakers and scholars to learn more about the crippling problem of poverty.

At the core of the film is a simple question he sets out to answer, “If there is so much wealth and progress around the world, why is it that so many still live in poverty?”

The film is powerfully narrated by Martin Sheen and spans the globe in its search for answers. It explores historical narratives and visits the poverty-struck countries it muses about. The sights seen in Bolivia, for example, show the real faces and people affected by unjust laws and corporate corruption.

Discussion facilitated by Deanna Cada, Director of the DeKalb County Community Mental Health Board, to follow.

Event is FREE and open to the public. Part of Money Smart Week.