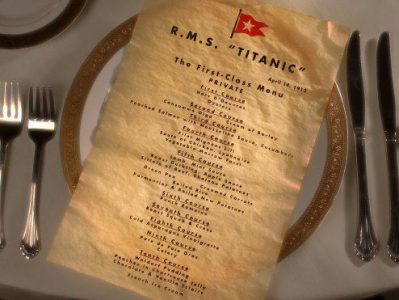 RMS Titanic sank in the early morning of April 15, 1912 in the North Atlantic Ocean, four days into the ship’s maiden voyage from Southampton to New York City. It was the largest ocean liner in service at the time. Titanic had an estimated 2,224 people on board when she struck an iceberg at around 23:40 (ship’s time) on Sunday, April 14, 1912.

It took 2 hours and 40 minutes for the ship to sink into the icy waters of the North Atlantic. Because of the shortage of life boats, 1,517 people lost their lives.

The RMS Titanic was built in Belfast, Ireland under the banner of the White Star Line Shipping Company. In addition to large numbers of British, Irish, and Scandinavian immigrants, other passengers were from Central and Eastern Europe. The scope of the tragedy was grand not only in its raw numbers but in naming among its victims members of some of the world’s most famous families, including the Guggenheims and the Astors. Also on board was the Denver socialite, Ms. Molly Brown, who survived (and a movie was made about her life—The Unsinkable Molly Brown).

The last port of call before sailing across the North Atlantic was Cork, Ireland, where a lot of hopeful Irish immigrants signed on to fill the third-class area of the boat. Few of the Irish men and women on board the Titanic were traveling in first and second class. The vast majority were in third class—young immigrants either returning from a rare trip home, or journeying to America for the first time. Published accounts of the Titanic’s final night show that these young Irish passengers were thoroughly enjoying their time aboard the ocean liner before disaster struck.

As the Titanic started to sink, the eight members of the ship’s band played music to try and calm the passengers, knowing they would not be able to board a life boat and would be lost (including the ship’s bugler). According to the recently recovered passenger records from RMS Titanic, the third class passengers who died when the liner sank were dumped back in the water. There were 334 bodies recovered of which 116 got buried at sea, most of whom were third-class passengers and crew members. Those travelers and crew who fell or jumped into the water drowned or froze in the icy cold waters.

There is a modest tombstone in the Fairview Lawn Cemetery in Halifax, Canada, among the others that mark the remains of the 121 victims of the RMS Titanic sinking who are buried there. The stone bears the number 227, the date of the catastrophe, and the inscription of one name … J. Dawson. After the movie, Titanic, came out in 1997, this gravestone became the most popular with visitors.

In 1912, Alice Johnson of St. Charles, Illinois was returning home with her two children (Harold, 4, and Eleanor, 1½) after visiting relatives in Sweden and Finland. Alice’s husband, Oscar Johnson, did not travel with his family and remained back in St. Charles.

During their time in Scandinavia, Mrs. Johnson had met two young Swedish women, Helmina Nilsson and Elin Braf, who were eager to go to America. Ms. Johnson swapped her family’s three second-class tickets for five third-class tickets, so that the women could travel to the United States with them.

After the Titanic struck the iceberg, a dining steward who had played with the Johnson children during the voyage, knocked on the family’s cabin door and instructed them to put on their life belts. He then escorted the three women and two children up to the deck. Alice, Harold and Eleanor Johnson made it onto one of the last lifeboats and Nilsson was saved as well.

Helmina Nilsson settled in Joliet, IL, where she met her husband. The couple eventually returned to Sweden and lived the rest of their lives there.

Elin Braf, the other young Swedish woman traveling with the Johnsons, did not make it onto a lifeboat and perished in the frigid North Atlantic. She was destined for Chicago, where her sister lived.

Harold Johnson lived out his life in Wayne, Illinois. He died in 1968 of pancreatitis at Delnor Hospital in St. Charles at the age of 60. His mother died the same year, at the age of 84.

Eleanor Johnson Shuman lived in Elgin for most of her life and was employed by Sycamore-based Auto Meter Products at their Elgin factory. When the 1997 movie, Titanic, was made, Director James Cameron visited her home in Elgin and Ms. Shuman attended the Chicago premiere of the movie as his personal guest. She was one of the last living survivors of the Titanic sinking, finally passing away in 1998 at Sherman Hospital in Elgin at the age of 87.