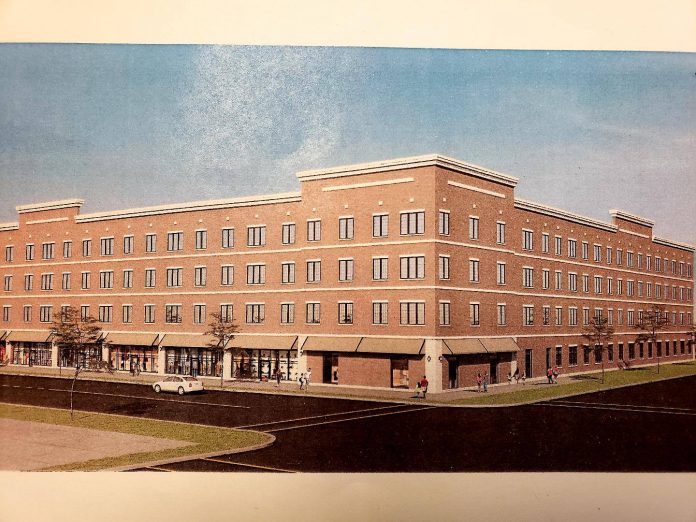 Another TIF project up for review in DeKalb.

After a previous rendering, John Pappas submitted a revised proposal for the old Mooney building, located at the corners of Fourth & Locust Streets. The new complex will have 86 luxury apartment units (more than the original plan calling for 76), both furnished and unfurnished. There will be close to 20,000 square feet of retail space on the first floor facing Fourth Street.

Updated plans for Pappas’ third downtown project include a similar exterior facade to the Cornerstone project, larger windows, and very little green space. Instead of the two separate but identical buildings, the new complex is now one large L-shaped building, set right up to the sidewalks of Fourth and Locust Streets. To address concerns that there will be no street parking, the future retail space would require patrons to park in the back of the building.

During the discussion part of the meeting, several council members supported the proposal to award the TIF funding, with final rendering still to be reviewed.

The one council member who seemed to question the process, but not the concept, was Scott McAdams. According to other media sources, Scott commented after the meeting was over.

“It’s the ‘we before me,’” McAdams said in an interview after the meeting. “I don’t want to be a problem or create difficulty. I’m pro-progress. I have no issue with the project itself or the developer specifically. I know there’s a lot of hostility towards him, and I don’t share that. But I did want to give voice to those people who have issues.”

First Ward Alderman, Carolyn Morris, said she felt Pappas’ initial site plan was more appealing than the new design. Yet, other community member comments were that the first rendering looked like a prison, with the new drawing more like a larger prison. Final plans are not complete, with hopes the new building will have some character, instead of being a brick box.