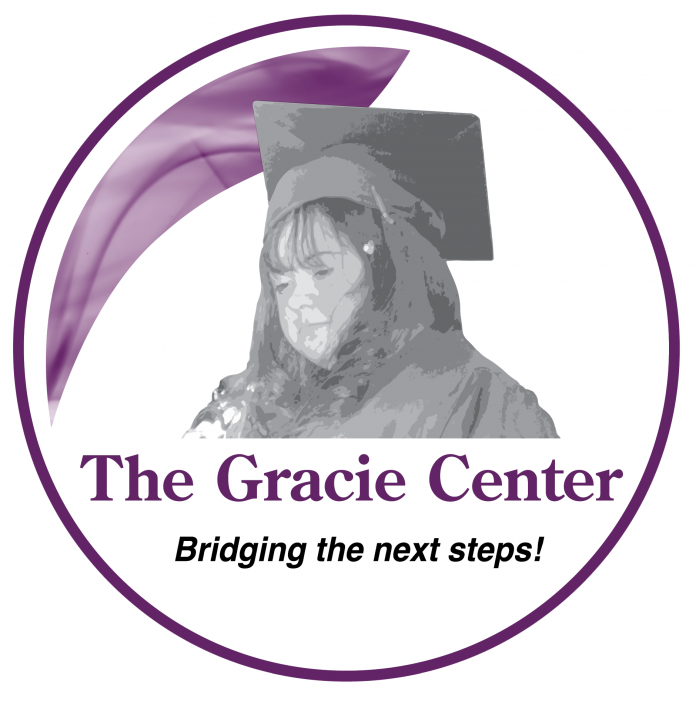 The Gracie Center is a not-for-profit organization started about six years ago by a couple of local mothers of adult children with disabilities. It was named after the daughter of one of the founders.

They were looking at the landscape of opportunities available for their kids at that time and discovered that there weren’t a whole lot of programs for people with disabilities once they finish up in the school system.

The mission of the organization is to provide opportunities for adults with disabilities to improve their vocational skills and living skills.

When they started in 2012, it was just the two moms and their daughters. They are still a small organization, currently serving about ten individuals, but that number fluctuates from year to year. They have had as many as about 20 in the program at one time. 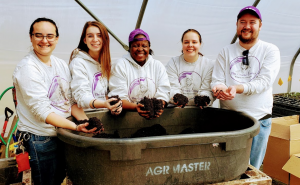 “The need for services like ours has grown, and we are finally getting to a point where we feel that we can expand and help to meet that need in a significant way,” said King. “Right now, the county is blessed to have Opportunity House, which does wonderful work. Unfortunately, not everyone gets the funding from the state that allows them to attend Opportunity House.”

The Gracie Center, therefore, is hoping to give people another option, by providing some of the same services as Opportunity House to prepare these adults with disabilities to be productive citizens. 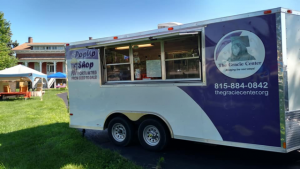 The thing that is unique about The Gracie Center, and what they are best known for is their PopUp SHOP business. One of the ways they provide training for their “crew members” is that they plant, tend, harvest and pop popcorn. They put the seed in the ground and ultimately end up popping it and selling it to the public. Through this whole “seed to sale” process, the crew learns a little bit about agriculture, food processing, food handling, sanitation and sales.

“It’s a great tool to give them a lot of different skills,” said King.

You can see their mobile popcorn shop at events around the community, including today’s Balloons, Brews & Blues Festival at the DeKalb Airport.

They make about half a dozen popcorn flavors, each named after a different member of their crew, and sell two different-sized bags. 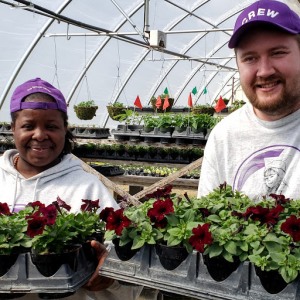 Besides their popcorn sales, The Gracie Center crew also makes and sells pizzas, and they do an annual fundraiser around February. This year, they had a very successful 80’s themed dance.

They are hoping to improve their winter popcorn sales by using the phrases “pop the question” and “it’s about to pop” to sell sell boxes of their popcorn for weddings, bridal showers or baby showers.

Joe King’s son, Daniel, joined the Gracie Center over three years ago and he immediately saw what a difference it made in his life. In fact, Daniel now helps train new crew members as they come into the program.

They have also done something they call “Crew Cafe” once a week at the Kingston Friendship Center, where they prepare and serve a lunch to friends and family. Recently, they started doing their Crew Cafe in the Sycamore Hy-Vee club room.

The Gracie Center also does community outings, such as visiting local businesses and practicing using the public bus system. Everything is aimed at developing practical skills that their crew members can use out in the community. 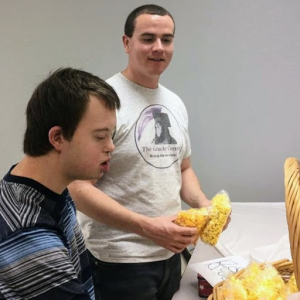 Right now, they are offering services for about four hours a day, three days a week (M-W) and serve all of DeKalb County. Most of their participants live in Sycamore, but they also currently have crew members in DeKalb, Genoa and Waterman. They work with TransVAC to provide transportation for the adults they serve.

If there are people out there who have young adults with disabilities in their family, they can contact the Gracie Center at info@thegraciecenter.org. There is no age criteria, but they must have already finished their high school/ life school programs. Most of their participants are young adults in their 20’s and early 30’s.

The Gracie Center is also willing to have their crew serve at other non-profit organization events, such as Tails Humane Society and Pay-It-Forward House, in order to give back to the community that helps support them.

Board Member, Kalie Pesek, said that they hope to get more community members and organizations involved in their mission.

“Programs such as this are definitely a necessity in our community,” said Pesek. “It’s been an honor to be able to help be an advocate for these adults who live with disabilities, and to encourage community involvement, and to encourage inclusiveness rather than rejection.”