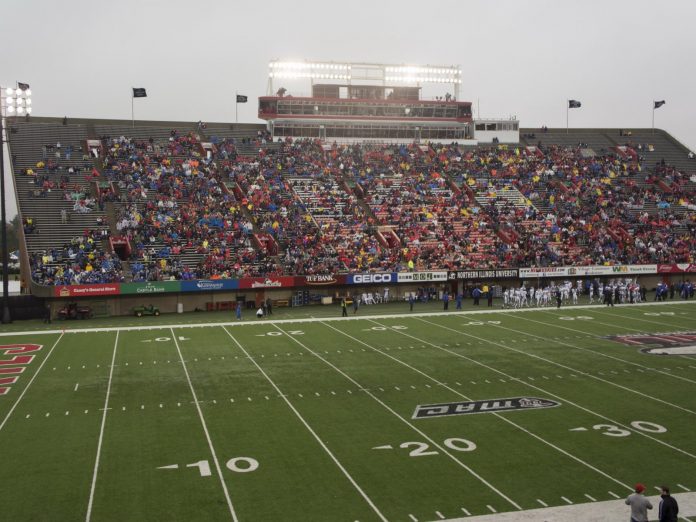 When one of the longest state football rivalry games happens, it can draw a large crowd.

Northern Illinois University will play Illinois State University at Huskie Stadium on Saturday August 31 at 6 p.m. This will be the 57th time these two teams have met and this year there will be a new twist.

The Mayors of DeKalb and Sycamore have challenged the Mayors of Bloomington and Normal with a hometown wager. The losing Mayors will award the winning Mayors gift baskets of select items from the loser’s home town area.

Mayor Jerry Smith of DeKalb and Mayor Curt Lang of Sycamore feel that Northern will have an advantage because of past records. Mayor Chris Koos of Normal and Mayor Tari Renner of Bloomington feel that being the underdog may have its advantage. ISU is an FCS (formerly called I-AA) school in football, but has had great success against FBS (formerly Division I) teams.

NIU’s new football coach Thomas Hammock hopes to turn the declining attendance around in 2019. With a five home game schedule and two games in November, having ISU bring fans may help the overall attendance.

Micki Chulick of DeKalb and an alumnus of Illinois State University feels there will be lots of alumni and fans from ISU. “I have been getting lots of calls from fellow ISU Alumni saying they are coming to DeKalb for the game,” said Chulick. “Because it is an early evening game many calls were asking where to stay and eat.”