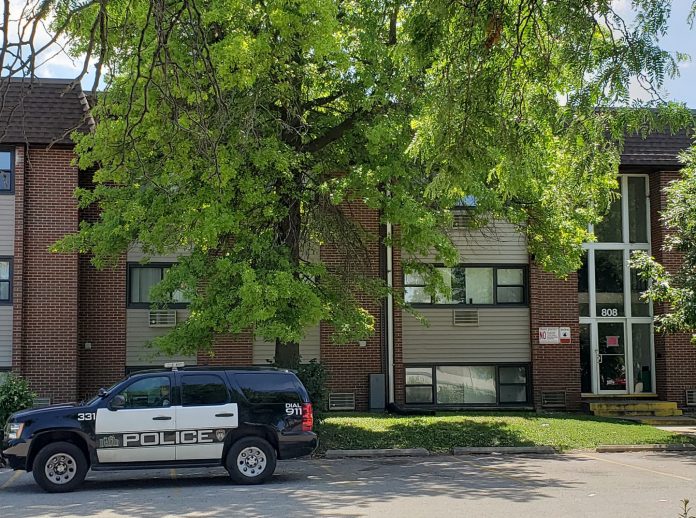 The City of DeKalb held a press conference Wednesday afternoon to discuss the fire that occurred on Tuesday night, July 9, 2019, at 808 Ridge Drive. The briefing ended up becoming a scalding rebuke of the apartment building’s owner, Hunter Properties. 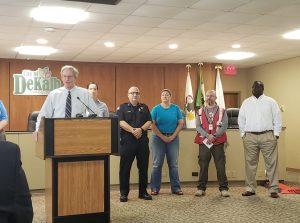 Pastor Joe Mitchell from New Hope Missionary Baptist Church also spoke at the podium to express his thoughts about the conditions at 808 Ridge Drive.

Fire Chief McMaster opened by describing the fire and rescue operation. The DeKalb Fire Department received a call at 10:54 p.m. on Tuesday evening and arrived at the scene to find “heavy fire” and “heavy smoke,” with people leaping from their apartment windows and others trapped inside yelling for help.

Alderman Morris said she spoke to a tenant of the building who dropped her baby from a 3rd-floor window to her husband below in order to rescue the infant from the fire. 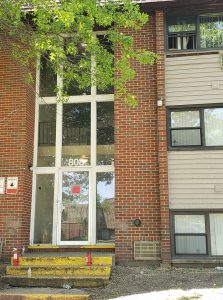 The DeKalb Fire Department and Police were able to evacuate the building, rescue people from upper apartments with ground ladders and suppress the fire, with the aid of other DeKalb County Fire Department apparatus and personnel.

People were treated on the scene, as well as at the Northern Illinois School of Nursing building across the street. Six victims were taken to Northwestern Medicine Kishwaukee Hospital with injuries, one of which was described as “life-threatening.” The initial damage estimate for the fire was $100,000.

After reviewing the fire area and the fire inspection, Fire Department officials deemed the building as uninhabitable and ordered it condemned, thereby displacing the 140 residents of the complex. The Red Cross, the DeKalb County Housing Authority and Hunter Properties are providing temporary housing for the occupants, as well as Tails Humane Society providing shelter for the pets rescued from the building. Family Service Agency of DeKalb County will also be providing assistance to the residents of the apartments. 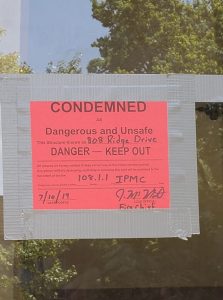 While Police Chief Petragallo would not give details about their ongoing investigation into the cause of the fire, Nicklas said it appears that someone set fire to mattresses in the hallway of the building. He then lit into Hunter Properties, saying they failed to provide a safe and secure home for their tenants and called the situation “shameful.” Nicklas said it further demonstrated a “cynical indifference to the conditions of that complex” and “speaks to a business model that puts a return on investment ahead of the welfare of the people.”

There have been five fires in this specific building, according to Chief Petragallo. He said that some of them have similarities and some or all of the fires may be related.

City Manager Nicklas confirmed that Hunter Properties paid the City $113,000 in fines within the last ten days for 414 code violations from over the last several months.

The website for the Hunter Ridgebrook apartment complex where Tuesday night’s fire occurred, describes their buildings as “luxury student housing” and “upscale.” Pastor Joe Mitchell from New Hope Missionary Baptist Church would disagree with that description. He recently visited the apartment building to help the daughter of one of his church members collect some belongings while her mother was in the hospital.

“The way people were living in 808 Ridge is a disgrace before God,” said Pastor Mitchell. “What I witnessed with my own eyes is not any way for any human being to live.”

You can view the entire press conference below: