Update: On Sunday evening around 8 p.m., fire broke out in the building again and fire trucks were dispatched.

The building was still smoking with hot spots still being monitored by the Sycamore Fire Department as of Sunday morning. Building A is a complete loss. According to the building owner, Jim Mason, some of the families are being relocated in other complexes and others are trying to figure out what is next.

There were no major emergencies or loss of life (other than small animals). As of 11:00 a.m. on Sunday, the building was being monitored by the Sycamore Fire Department and Illinois State Fire Marshal.

The apartment complex was built in the early 1970s and was up to the code for buildings from that era.

DeKalb County Community Gardens was on location near Southeast School to provide food for those in need.

The Sycamore Car Show held a 50/50 raffle to help victims of the Fire.

Sycamore Fire officials had not released any additional information.

DCO contacted the building owner, Jim Mason, and he commented that he was working with the residents on what the next step would be. 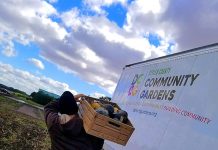 DCCG to Give Away 5,000 Pounds of Food on GivingTuesday 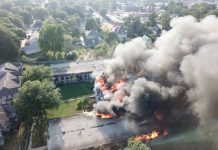 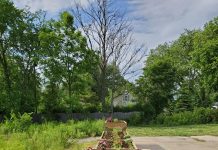