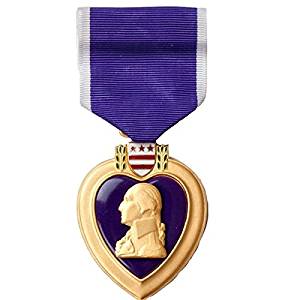 Purple Heart Day is observed on August 7 each year and is a time for Americans to pause to remember and honor the brave men and women who were either wounded on the battlefield or paid the ultimate sacrifice with their lives. Purple Heart Day is also known as National Purple Heart Day, Purple Heart Recognition Day and Purple Heart Appreciation Day. This year’s Purple Heart Day will be observed on Wednesday, August 7, 2019.
The Purple Heart has a long list of criteria for eligibility-too long to list here. But in general it may be awarded to members of the Armed Forces of the United States who have been “wounded, was killed, or who has died or may hereafter die of wounds received” from, according to the U.S. Army official site, any action against the United States, action with an opposing armed force, the results of any hostile “foreign force” and many other situations where men and women in uniform may find themselves under attack. In general, the Purple Heart is awarded for injuries sustained because of enemy attack. Injuries sustained for other reasons not related to things “not caused by enemy agents” are generally not acceptable as grounds for receiving the Purple Heart, though friendly fire injuries do qualify as long as the friendly fire was intended for the enemy. The Purple Heart is now given to persons who are injured, wounded or died while a prisoner of war (POW). The Purple Heart Medal is Awarded to any member of the Armed Forces of the United States or any civilian national of the United States who, while serving under competent authority in any capacity with one of the U.S. Armed Forces, after April 5, 1917, has been wounded, killed, or who has died or may hereafter die of wounds. Each branch of the military can offer a Purple Heart.

The holiday was first observed in 2014, is considered an unofficial observance meaning that businesses, government offices etc. do not close on this day. Some states offer special military ‘Purple Heart’ and veteran license plates. Contact Illinois Secretary of State for details. 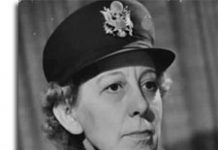 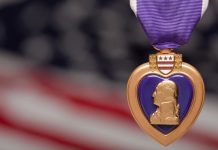 Who Wears the Purple Heart