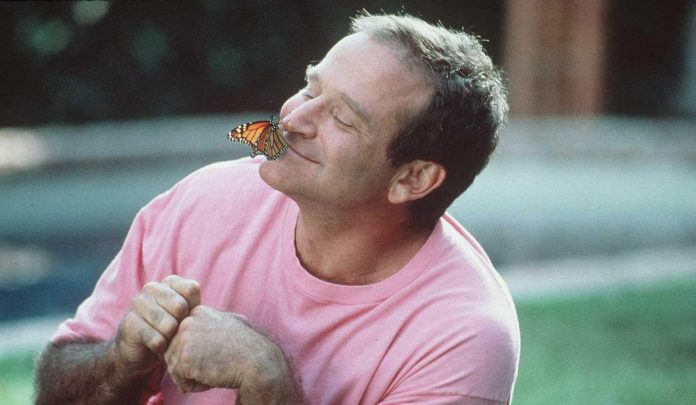 August 11 marks the 5th anniversary of the death of the late Robin Williams. Williams had a great passion for acting, and he made millions of fans laugh and cry with his indelible comic performances over the years. He made the smooth transition from TV shows to films and became one of the most versatile actors of his generation.

Seeing Williams live on stage, on television, in the movies or in a serious interview, listening to and watching comedian/actor Robin Williams was an extraordinary experience. An improvisational master with a style comparable to Danny Kaye, his words rush forth in a gush of manic energy. His repertoire punctuated even the most basic story with character voices that often journeyed into flights of comic fancy, bawdy repartee, and unpredictable celebrity impressions before returning earthward with some pithy comment or dead-on observation.

Robin was often a guest on the Johnny Carson Show and would have the audience laughing from the minute he arrived on stage till the end of the show. Some of the best outtakes of the Johnny Carsen show were when Willimas and Jonathan Winters appeared on the same night. Williams and Winters were both great friends and rivals. (Winters died April 11, 2013)

Born in Chicago on July 21st, 1951, Williams was raised as an only child and had much time alone with which to develop his imagination, often by memorizing Jonathan Winters’ comedy records. After high school, Williams studied political science at Claremont Men’s College, as well as drama at Marin College in California and then at Juilliard.

His first real break came when he was cast as a crazy space alien on a fanciful episode of Happy Days. William’s portrayal of Mork from Ork delighted audiences and generated so great a response that producer Garry Marshall gave Williams his own sitcom, Mork and Mindy, which ran from 1978 to 1982. The show was a hit and established Williams as one of the most popular comedians (along with Richard Pryor and Billy Crystal) of the ’70s and ’80s.

His films Good Morning, Vietnam, in which the comedian-cum-actor portrayed real-life deejay Adrian Cronauer, stationed in Saigon during the late sixties. Levinson shot the film strategically, by encouraging often outrageous, behind-the-mike improvisatory comedy routines for the scenes of Cronauer’s broadcasts but evoking more sober dramatizations for Williams’s scenes outside of the radio station. Thanks in no small part to this strategy, Williams received a much-deserved Oscar nomination for the role but lost to Michael Douglas in Wall Street.

On August 11, 2014, Williams committed suicide in his Paradise Cay, California estate at the age of 63. His wife attributed his suicide to his struggle with depression (Lewy body disease). Although he committed suicide in 2014, Robin Williams’ net worth in 2018 was estimated to be a healthy $50.0 million.

One of his best presentations was Robin Williams as the American Flag.