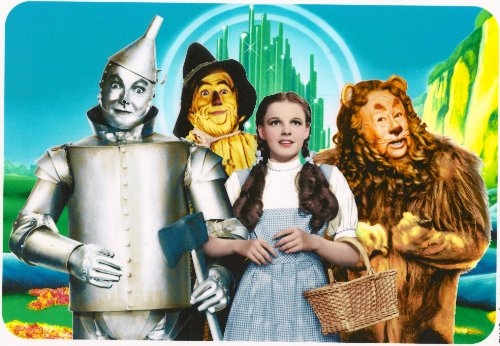 On this date in 1939, The Wizard of Oz became an official American Musical Fantasy featured film produced by MGM (Metro-Golden-Mayer). This cinema gem is widely considered to be one of the greatest films in cinema history, even competing with may successful films in 1939.  It is widely known as the best-known and most commercially successful adaptation of L. Frank Baum’s 1900 children’s book The Wonderful Wizard of Oz.   Directed primarily by Victor Fleming (who left the production to take over the troubled production of Gone with the Wind), the film stars newcomer Judy Garland as Dorothy Gale alongside Hollywood legends Ray Bolger, Jack Haley, and Bert Lahr.

Characterized by its legendary use of Technicolor (from black and white intro to full-color ending), fantasy storytelling, musical score, and memorable characters, the film has become an icon of American pop culture.

The beloved characters and familiar plot points were mostly all there in the original children’s book, from the Kansas farm girl in shiny slippers transported to Munchkin land by a terrible tornado to the wicked witch, the brainless scarecrow, the heartless tin woodsman and the cowardly lion she encounters once she gets there. But what’s missing, of course, from Frank Baum’s bestselling novel The Wonderful Wizard of Oz, is the music that helped make those characters so beloved and those plot points so familiar.  It was nominated for six Academy Awards, including Best Picture, but lost to Gone with the Wind, also directed by Fleming. It did win in two other categories: Best Original Song for “Over the Rainbow” and Best Original Scoreby Herbert Stothart. While the film was considered a critical success upon release in August 1939, it failed to make a profit for MGM until the 1949 re-release, earning only $3,017,000 on a $2,777,000 1939 budget, not including promotional costs, which made it MGM’s most expensive production at that time.

So where do you premiere a movie of this grand scale?  New York City, Los Angeles, Chicago or someplace in Kansas? This official big Hollywood premiere was scheduled for August 15 at the Gurman’s Chinese Theater in Hollywood, California.  Studio chiefs spent so much money on its production ($2.7 million) that they were eager to see how it would play in America’s heartland. To see how the movie would be received, it was pre-premiered on August 12 in Oconomowoc, Wis., at the Strand Theatre.  Oconomowoc was also the hometown of one of the Munchkins (Meinhardt Raabe) and Wisconsin was the home state of Herbert Stothart, who won an Oscar for the musical score to “Oz.”