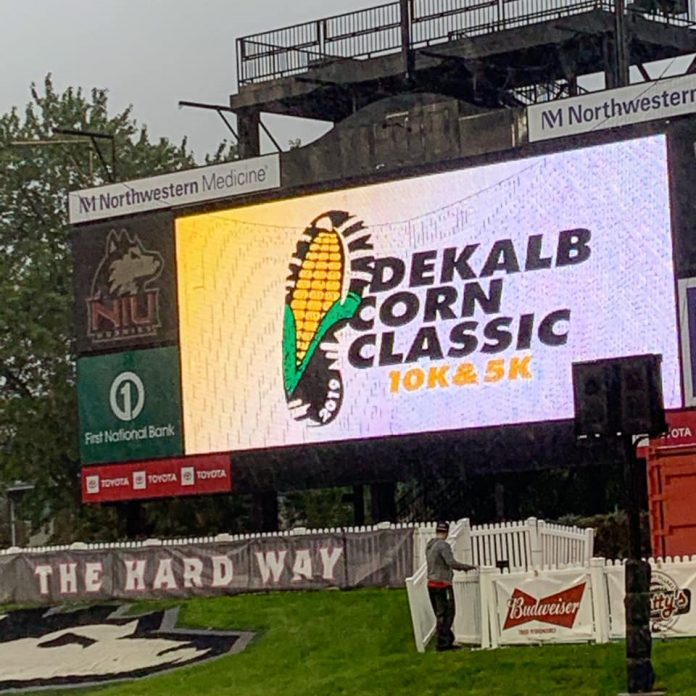 Another great event for the DeKalb Corn Classic runners.  “The rain could not stop the runners from attending,” said one of the event organizers Cohen Barnes. Barnes, the owner of Sundog, also was pleased with the number of runners this year, exceeding the number from the 2018 race.

The DeKalb Corn Classic 10k and 5k runners had the opportunity to run through the NIU Huskie Stadium while the NIU Marching Band played, the Silverettes performed and the cheerleaders cheered on all the runners. The race-course went through the campus and local residential section before ending downtown DeKalb.

“Although the weather did not cooperate, Corn Classic was still a great race and good times,” said local DeKalb runner Tricia Maxwell. Following the race, many runners and guests enjoyed the ‘Taste of DeKalb’ held in the Mayor’s Plaza on Second and Locust Street.

Events like the DeKalb Corn Classic help bring people to the DeKalb area and showcases the improvements in the downtown area. The next major event will be Saturday, October 5th when the ‘Back Alley Market‘ will fill the Mayor’s Plaza with 40 + craft vendors.

The Northern Illinois University Marching Band had a busy day, first welcoming the runners to the start of the race event and then departing for Chicago and performing the half-time for the Chicago Bears game. The Band must be a good luck charm as the Bears won the game.