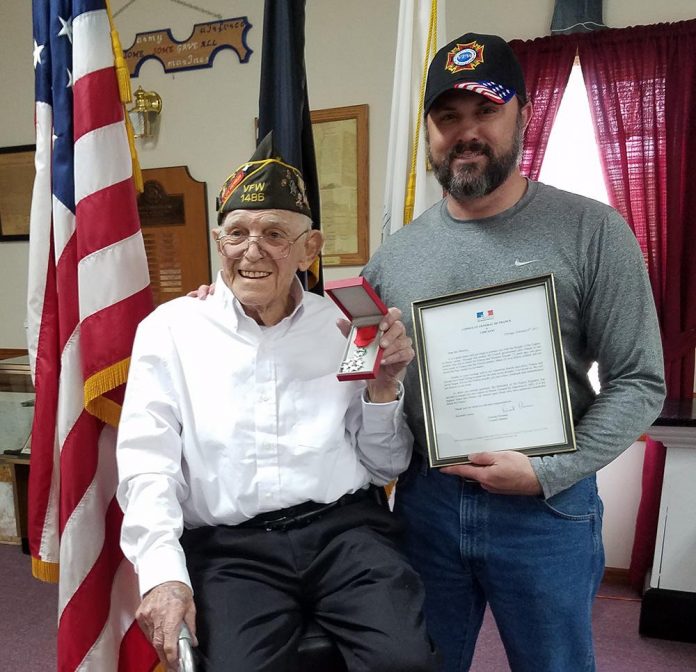 Local DeKalb County Veteran Don Beesly, a member of Sandwich VFW Post 1486 and Plano Legion Post 395, was recently awarded the French Legion of Honor medal in recognition of his service during WW II. Nick is a long-time member of Leon Burson Post 395 and was a long-time businessman in Plano following his return to Plano at the conclusion of his military service.

After arriving in Europe, Pvt. Enoch “Nick” Scull was taken a prisoner of war while serving with the 28th Infantry during the Battle of the Bulge.  While recuperating in an area they thought to be safe he and others were captured by Germans.  Captured around Christmas day, December 25, 1944, he was held at three different camps until they were liberated from Stalag IX-A by General George Patton’s army on Good Friday, March 30, 1945.  The last camp, Berga Am Elster, was a slave labor camp.  While a POW he and others were marched through Germany to railroad area, put on a train without food or water.  At the time they were liberated Nick had lost 55 pounds.

The French Legion of Honor is an order of distinction first established by Napoleon Bonaparte in May of 1802. It is the highest decoration bestowed in France and is divided into five categories: Chevalier (Knight),  Officier (Officer), (Commander), Grand Officier (Grand Officer) and Grand Croix (Grand Cross). It is also presented to anyone who helps the cause of France, regardless of where they come from.

Recently members of Leon Burson Post 395, working in cooperation with Home Depot, acquired materials and arranged for the installation of a wheelchair ramp at the home of WW II veteran Nick Schull Jr.

Enoch “Nick” Scull is currently 95 and still involved with the local Veteran Groups.

Thank you ‘Nick’ for your service to your country and we salute you.