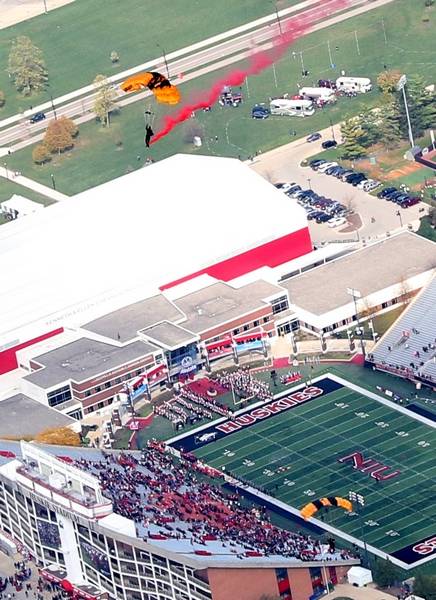 From The Sports Desk at DeKalb County Online

What’s the deal?  Why do “we” spell it H-u-s-k-i-e as opposed to H-u-s-k-y?
People have asked that question for decades, especially in light of the fact that the breed of dog ends with a “y” as does the of higher-profile University of Washington of the PAC-12.

The answer?  It’s H-u-s-k-i-e.  It’s us.  Unique, albeit inadvertent branding.  By 2020, Northern Illinois University will have carried the name Huskies for eight decades.
The stumbling block for the uninitiated?  The singular collective form, noun or adjective.  Huskies.  Right or wrong, it’s ingrained into our local culture.  After 50 years in DeKalb, I’m almost a townie.  It’s the way we talk here.  Who cares what Noah Webster, Spellcheck.net, or cranky copy editors think? I’m a Huskie.  Thomas Hammock is a Huskie.

Upon Lisa Freeman’s investiture as NIU’s 13th president, according to the DeKalb Daily Chronicle, Board of Trustees chair Dennis Barsema observed:  “Since arriving on campus in 2010, she (Freeman) has realized what it meant to be a Huskie.” Dennis would know.  He’s a Huskie, too. But sometimes, I wonder about our world.

Earlier this football season, the Chicago Tribune sports page referred—believe it or not—to our home field as “Husky Stadium.”  Sorry, that’s in Seattle, Wash.  After all these decades, Mother Tribune.

In recent years, every time NIU moves the chains on offense, the public address announcer dutifully reminds us:  “And that’s another Huskies’ first down!”  Huskies?  No, Huskie first down.  PA man must be an SIU grad.

What institutional memory?
In 1940, NIU sought a more colorful mascot / nickname—“a term with a trifle more dash” than Profs or Teachers (used in reference to NIU’s original mission as a teachers’ college), Cardinals (due to the school’s athletics jersey colors), or the (in reverent recognition of long-time athletics director George “Chick” Evans).

After much deliberation, the four-man committee of Evans, Harold Taxman, Walter Lorimer, and Harry Telman, all members of the Varsity Club, reached their decision as reported in a three-paragraph story on page three of the January 25, 1940, issue of the Northern Illinois, the student newspaper and precursor to The Northern Star.

“From now on the word ‘Huskies’ will be used constantly in this paper and in other papers to indicate our athletics ,” the unsigned story stated.  “Not only does the term have color and meaning, but it is particularly apt as in regards to NI’s varsity teams.”

Apt?  It was perfect. The American Kennel Club notes that the Siberian Husky breed’s temperament as “loyal, outgoing, mischievous, friendly, fastidious, and dignified…(it is) quick and light on his feet and free and graceful in action.  Most important, such a dog could excel and thrive during those DeKalb polar vortex winters.

At the same time, the dichotomy may have unintentionally originated.  The same article mentioned “Huskies” and “Huskie” three times each.  A pessimist might have wondered if either Evans (who had a Master’s degree), the committee, or the reporter could spell.

In nearly 40 years working in the NIU Office of Sports Information and diligent research in our files and at the Regional History Center, I can report that both “Huskie” and “Husky” were not only used in official publications (media guides, yearbooks, news releases), but local newspapers as well between 1940 and 1967.

Consummate journalist Bud Nangle put an end to that upon his return to campus in 1967-68 and his second tenure as sports information director.  In the 1968 NIU Football Guide Book, Nangle put a “Huskielines” headline over the athletics staff office phone numbers and a “Huskie Profiles” over the student-athlete bios.

About the same time, Nangle designed the distinctive masthead for our news release stationery (remember few media entities at the time had fax machines, plus PDFs and the internet years away) with the Bob Brigham-commissioned boxing Huskie logo on the top left, looking into a bold Cardinal brush type “Northern Illinois University” header and a black subhead “A Huskie Happening…from Bud Nangle, sports information director.”  Believe me, the on and mailing list was extensive.

As Bud’s assistant for 12 years, I learned about his acumen at the DeKalb Daily Chronicle, Chicago Daily News, and as the executive sports editor of the Toledo Blade.  He was old-school. demanding, exacting and stressed daily that a university PR entity should reflect an institution of higher education.  Most of all, if Bud said it was spelled Huskie, it was Huskie.

Two of the approved recommendations were for Huskie Stadium (nameless since its inception in 1965) and Chick Evans Field House (known previously as Northern Field House).  One more time.  Huskie Stadium, not Husky or Huskies Stadium, get it?
The rationale for the former, according to Nelson’s later:  “The Huskie dog has been the mascot and symbol of NIU’s athletic teams for many years.”

Thanks to the Regional History Center, I’ve seen photostatic copies of a 1961 letter from Francis Stroup and another from Clara Sperling in 1963 with the lyrics and title of the “Huskie Fight Song.”

At each home football game, NIU athletics recognizes a “Huskie Legend.”  And I understand President Freeman will be unveiling a Huskie Pride statue on campus this fall.  So, in this colloquial world of abbreviations, slang, LOLS, good, we have some Huskie compliance.

In 1976, Nangle asked me to revamp our football and men’s basketball game programs.  “Why not call them ‘Huskie Illustrated’?”, I suggested.  We did and the title remained the same for 30-plus seasons.  Nobody in academia put us on NCAA probation.
Two years later, the first “Huskie Heritage” stories on the history of our mascot, school colors, and music appeared in our football media guide and game program.  To this day, the same stories are included on the NIU athletics website.

Me?  I was conditioned and in my 22 years as SID, I followed my mentor’s lead on Huskie as have the current athletics communication staff.
In 1984 when I succeeded Bud as SID, I asked the late Jim Mellard, the former chair of the NIU English department (and later interim athletics director in 1987), if our spelling was a grammatical no-no.

“No, Mike, it’s perfect,” Mellard reassured.  “Collective singular.  It’s us.”
Husky, Huskies, or Huskie?  Huskie, that is the answer.