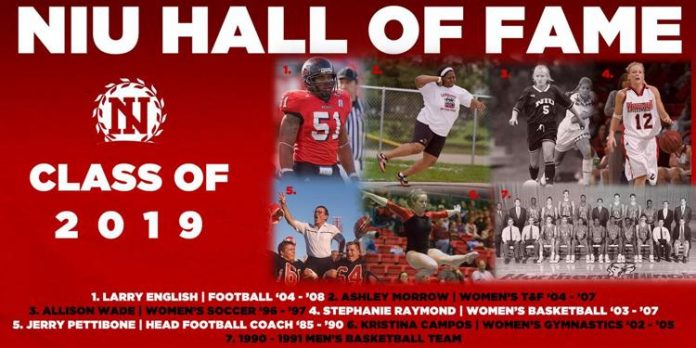 The legends. The icons. The ‘best’ of Northern Illinois University Intercollegiate Athletics’ Best. The Huskie all-time greats that your grandfather or dad saw play decades ago. Those vintage NIU squads that transcended “a score or two.” Unforgettable student-athletes, coaches, staff, and administrators who carried the Cardinal and Black banner since 1899.

This virtual Huskie sports “Who’s Who—the 212 individual and 18 teams representing 34 induction classes from the inception of the NIU Athletics Hall of Fame in 1978—graces the walls of the lobby of the Convocation Center since October 2008.

As the cliche goes, if only these walls could talk. They do. Volumes. The Hall of Fame display project was the culmination of 18 months of planning, designing, researching, writing, and installing by NIU Intercollegiate Athletics and Streng Design and Advertising in St. Charles (owner Rick Streng is a 1979 alumnus). The colorful display transformed a dreary, gray, cinder block hallway into an eye-catching Northern Illinois “Time Tunnel.”

My role in this process was to update, expand, and rewrite the almost 200 individual bios of the Hall of Famers on those walls, plus find the appropriate photographs and the vintage portrait drawings of each inductee, and do the same for the teams. Yes, I spent an inordinate amount of time perusing old files, microfilms, yearbooks, etc., at the NIU Regional History Center. After six decades of being involved in Huskie athletics, even I learned something new.

According to Steve Clevenger, an ’85 alum, the project production manager for the Streng design firm, the entire original “Walls of Fame” in the North Lobby are comprised of nearly 60 gigabytes worth of scans (200 in all) and digital files. In total, the original display measured 120 feet by eight feet tall. With the overhead entry banner at the end of the lobby measuring 30 feet long by 28 inches deep, over 1,000 square feet of Hall of Fame graphics were mounted permanently to the Convocation Center walls. Since the 2009 installation, additional classes have been added in the lobby opposite the concession area. There is also a panel featuring a brief history of the NIU Hall of Fame.

Basically, the project dated back to the pre-Convo days in Chick Evans Field House. Most people in the community remember that there was a “Hall of Fame Room” in the south end of the field house. Not only was it the social center of all NIU athletics events in that venerable facility, but the duplicate plaques of the Hall of Famers lined the walls. There were great Huskie pride and ownership in that room. Families would visit in the summer just to read and see the plaques. Grandchildren would proudly point to their relative’s plaque and say: “That’s my grandpa.”

Our project mission: Recreate this Northern Illinois athletics nirvana, that pride, on a much grander scale.

For many years at the induction ceremony, I made a point of telling a few stories about our Hall of Famers. After all, we’re all in the education business, right? The masses need to know. I’ve been involved with the Selection Committee since the mid-1980s and people have asked numerous times: “Who’s in this Hall of Fame?” I got their drift. Subconsciously, the words “of any significance” are unstated. Institutional amnesia? Big Ten envy? Knock it off. Keep reading and judge for yourself.

This Hall of Fame is a microcosm of this institution where—for almost 125 years—middle class students have overachieved in many diverse fields, thanks to the stage, the platform, the culture provided by the university. This is our heritage. This is us. This is NIU.

And so to illustrate just who is in this Hall of Fame, read on. Then come visit NIU’s Convocation Center, take in the display, and see for yourself. Better yet, RSVP for the 2019 HOF induction ceremony on Friday (October 25) in the Duke Ellington Ballroom of the Holmes Student Center.

No. 1: The late Ken Henry (1949-52, 1954-55), our only Gold Medalist, was in the charter 1978 induction class. A golfer at NIU and a longtime teaching pro on the North Shore, Ken was a world-class speedster and won the Gold in the 500-meters at the 1951 Winter Games in Oslo, Norway. What I forgot was the fact that Ken lit the Olympic torch for the 1960 Winter Games in Squaw Valley. U.S. skier Andrea Meade Lawrence skied down to the ice rink, handed the torch to Henry who skated one and a half laps, then lit the flame in front of dignitaries such as Vice President Richard Nixon and Walt Disney, 47,000 spectators, and an international TV audience.
For his training, Henry used to ride his bike from DeKalb to the north side of Chicago and back.

No. 2: One of my favorite Hall of Famers is DeKalb native Mary Terwilliger (1931-33, 1934-36). When she was a student, there were no women’s intercollegiate athletics. One winter Saturday morning in 1932, she read in a newspaper about a novice track meet in Chicago, borrowed someone else’s shoes, gym suit, and warm-ups, and placed in the novice 60-yard dash event, won by Tidye Pickett. Six months later, Mary was participating in the U.S. Olympic Trials. She won her preliminary heat in the 100 meters, finished third in the semifinals, but got nosed out of the top three in the finals. At the 1936 U.S. Olympic Trials, sadly, Mary missed the top three again. But she toured North America on a pro track circuit with meets in Madison Square Garden, the Chicago Stadium, etc., and was considered a peer of Olympians such as Pickett, Babe Didrikson, and Stella Walsh.
Her younger brother Bill (1938-41) gained induction by starring in track (National AAU decathlete champion in 1942) and basketball (All-Century pick). Mary’s older brother George lettered in football (1923-24) and ran track.

No. 3: Prior to the 2009 NFL Draft but after the league’s combine testing, a young Chicago suburban sportswriter opined now that the Atlanta Falcons’ running back Michael “The Burner” Turner had made All-Pro on offense, NIU senior Larry English could become the program’s best-ever pro player on the other side of the ball. A 2019 Hall of Fame inductee, English made school history on April 25, 2009, by becoming the (then) highest NFL pick in Northern Illinois history as the No. 16 choice in the first round. How ironic. What about the original Larry? Ever hear of ex-Huskie defensive end Larry Brink (1945-47), All-Pro, All-NFL Pro Bowler with the Los Angeles Rams in the early 1950s on several title teams? Guess not. In doing the display and rechecking some of Brink’s exploits, I accidentally discovered that he actually was our first NFL draft pick (17th round in 1948 by the Rams). When the early “Huskies in the Pros” list in our media guides first appeared in the late 1960s, Brink was listed as an NFL free agent. For decades, in Brink’s personal file, there are notes stating that Brink was a “free agent” in former NIU sports information director Bud Nangle’s handwriting. Nangle and Brink were NIU contemporaries after World War II, plus Nangle was the sports editor of the DeKalb Daily Chronicle in the late 1940s. Guess Google didn’t exist back then. Brink, of course, was also in the celebrated 1978 charter induction class.

No. 4: Funniest Hall of Fame anecdote? Tim and Tom Gullikson (1969-73) were identical twins and established themselves not only in the world of collegiate tennis but at the Grand Slam level. Inducted into the Intercollegiate Tennis Association Collegiate Men’s Tennis Hall of Fame in 1999, the Gulliksons qualified for the NCAA Championships three straight years. Tom was an ITA Coaches Association All-America in 1972. Both played and coached at Wimbledon. Prior to his untimely death in 1996 (brain cancer), Tim coached many of the world’s premier players—including Martina Navratilova and No. 1-rated Pete Sampras. Tom was named the U.S. Davis Cup captain in 1994-95 and also served as the U.S. Olympic team’s coach at the 1996 Summer Games in Atlanta. Tom was a left-hander and Tim a right-hander. Early in their pro playing careers on the European Tour, a foreign player met Tom and Tim in singles play on successive weekends and lost twice. “My God,” he remarked, “this Gullikson is truly great. A week ago, he beat me playing left-handed and now he beat me right-handed.” True story.

No. 6: Did you know this? Many people confuse NIU’s “Chick” Evans with the Western Golf Association’s “Chick” Evans. They are two separate individuals. George “Chick” Evans served as Northern Illinois’ athletics director (1929-68) and coached several sports during his long tenure. It was his 1968 memorandum that created this Hall of Fame. Charles “Chick” Evans Jr., was one of the top amateur golfers in the early 20th century and began the caddie scholarship programs in the 1930s. Our “Chick?” Charter inductee.

No. 7: In my opinion, DeKalb native Reino Nori (1932-36) was the greatest student-athlete on campus during NIU’s first 50 years. No male in Huskie annals has duplicated his 17 varsity “NI” letters in five sports (football, basketball, wrestling, baseball, and track). Our first NFL player and participant in the Chicago Tribune College All-Star Game at Soldier Field (1936), Nori tied for first place in the long jump in a track dual meet against the University of Chicago (remember, this is the Little 19 Conference vs. the Big Ten Conference back then). The person Nori tied in that meet—the UC’s Jay Berwanger, the first recipient of the coveted Heisman Trophy. Charter member.

No. 8: CBS Sports’ Brent Musburger nicknamed him “The King of the 360s.” No. 33 was the first recipient of the National Association of Basketball Coaches National Slam-Dunker of the Year award (1985-96). To describe Northern Illinois small forward Kenny Battle (1984-86), one SID invented the world “slamboyant.” In my experience, there is no more decorated student-athlete as a freshman-sophomore in school history. As a rookie with the Phoenix Suns, Battle participated in the NBA Slam-Dunk Contest and got robbed (underscored) by the judges. Atlanta Hawks’ great Dominique Wilkins won, but Kenny should’ve at least advanced to the semifinals. After the competition, Kenny slumped in front of his locker, head covered by a towel. A man came over to put his hand on Battle’s shoulder. “Son, if it means anything, you were the best dunker out there today.” Kenny removed the towel and looked up. The voice belonged to the iconic Julius “Doctor J” Erving—one of the Top 50 all-time NBA greats and maybe the most creative in-game dunker in history. Inducted in 1996.

No. 9: Over the years, Northern Illinois football has been blessed by having some of the greatest rushers in the game. Three NCAA FBS rushing kingpins—all Hall of Famers in Mark Kellar (1973), LeShon Johnson (1993), and Garrett Wolfe (2006). Few anywhere can match numbers and accomplishments with Johnson (1992-93)—better known as “The Cowboy.” Start with a school-record 1,976 ground yards in 1993 (the No. 4 all-time single-season rushing campaign then in major-college history), the first and only NIU unanimous First-Team FBS All-America pick (eight squads) at the glamour position of football, the (then) No. 4 career rusher (yards-per-game average) in NCAA history behind Ed Marinaro, O.J. Simpson, and Herschel Walker. Class of 2003.

No. 10: Finally, who on this planet has not enjoyed the “melts in your mouth, not in your hand” pleasure of a bag or box of M&M Candies? John McNamara (1927-30), a former Northern Illinois football captain and All-Little 19 performer, invented the M&S peanuts version, created the world-famous “melts in your mouth…” advertising slogan, and became chairman of the board for Uncle Ben’s Converted Rice before returning to his alma mater (NIU) to teach marketing (1970-78).