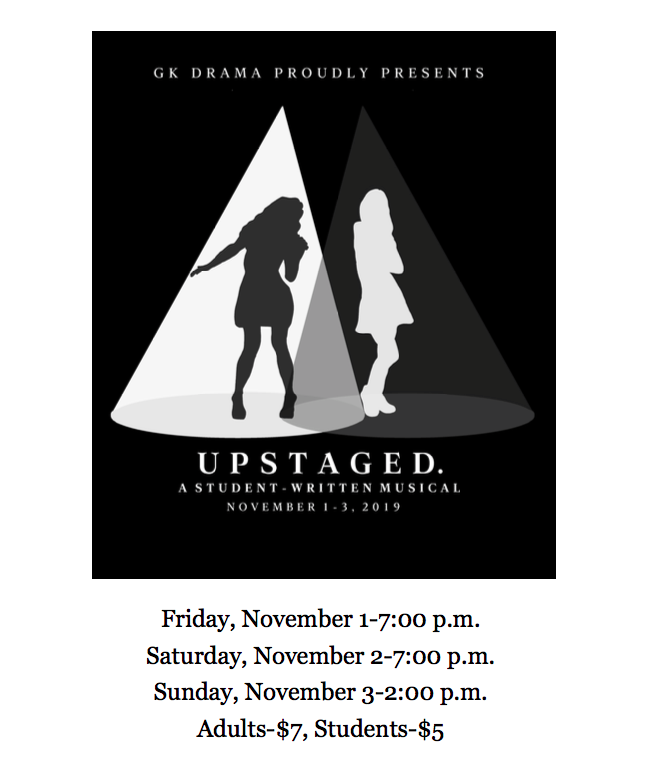 Every year the Genoa-Kingston High School (GKHS) theater students perform a play, and in the spring they do a musical. However, this year is unlike any other. Instead, the theater class has decided to write their very own production, entirely from scratch, and it’s a musical, too! As part of the creation, they also wrote original music. This is way above and beyond the plays they typically do, just in the sense that the students really took over the entire process. The entire thing is an impressive feat, and something they want to share with other students, parents theatergoers.

The Genoa-Kingston drama department has been working very hard in the past few months on bringing this show, ‘Upstaged,’ to life. This coming of age tale tells the story of a group of high schoolers facing the challenges that come along with putting on a production. From young students’ dreams and aspirations, struggles of not being heard, and romance, there’s something for everyone in our show. Whether you’re a participant or just an observer, this production looks into the lives of young actors. It is a unique story full of comedy, emotions, and lots of fun.

“Every year, the school’s thespians attend a statewide event called ‘Theaterfest,’ and we can submit shows to be picked to perform there,” commented GKHS senior and thespian Lily Johnson. “We thought that being chosen to perform there would be a great experience, so we decided to do the most challenging thing we could think of: write our own show. This way we could write towards our casts vocal and acting part, and our own special quirks.”