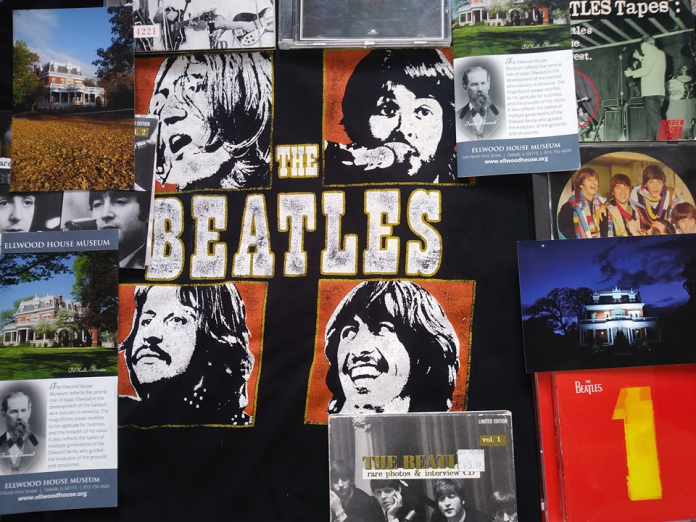 On Saturday October 26th at 6:00pm  area performance group Wooden Box Theater will present an event that will display local theatrical performers, guest appearances, area small business vendors, and live music with their production of “Hypnotizame : Beatles Night at the Ellwood House,” the group’s 9th annual Beatles themed event, and will take place inside the Ellwood House Visitors Center. The event’s name was inspired by the song “Hypnotizame” by reggaeton artists Wisin & Yandel.

“Beatles Night” will feature live music by Bill Leighly with Rebecca Persephone on violin, Alex Galindo of the band Not Elliot, Loud Noize (Andrew Brower), Nick Person, David Rae, NeverclearX (Sean Wilcox), and Happy the Rapper (Dustin Castillo).  There will also be special guest supporting acts throughout the night. Event writer Daniel Sherrrill says of the lineup, “Every year around the time of Beatles Night, we try to cast diverse artists, and show them off with exclusive performances as a musical gift to the Beatles, as opposed to the usual Beatles tribute nights. The goal for our events is to perform our hearts out as if the Beatles were sitting in the front row. It’s been a long-time mindset with each of Wooden Box Theater’s yearly nights dedicated to the iconic band.”

During the event the audience will be treated to special guest appearances by La Salle County Democratic Chairwoman and current 2020 US Congress candidate, Dani Brzozowski, making her much anticipated debut with Wooden Box Theater, along with Rosanna Francesca and Eric Vorel of Ever After Enchanted based in DeKalb. There will also be a display table and representative present from the staff at Melanie Bemis : Independent Scentsy Director out of the Naperville area.

The event was written and conceived by Daniel Sherrill, with assistance from Bill Leighly, Nick Person and Andrew Brower. Sherrill and Leighly have been constant event collaborators since 2008, with Brower and Person being recruited to help shape the event by Sherrill during recent editions of open mic night at Ax in Hand Guitars in DeKalb. Event writer Daniel Sherrill explains, “Bill Leighly and I work extremely well together and have for many years, I was in search of a couple more collaborators and happened to visit one of the first open mic nights at Ax in Hand here in DeKalb this summer and instantly found Nick Person and Andrew Brower. I am now a huge fan of their music and them as people.”

The group began it’s ‘Beatles Nite’ annual tradition in 2011 at the House Cafe, and have brought the ever evolving event to the Ellwood House, Hampton Inn, and NIU Skyroom, and this year it will serve as the lead-in event to segue into Wooden Box Theater’s next event series planned for early Spring, “Wooden Box Theater in 2020,” which will see the group present a 4 part mini-series spanning venues in DeKalb and Geneva.

Wooden Box Theater, as a performance and event writing team, began on stage during an edition of Open Mic at the House Cafe in the summer of 2006, and  continues to evolve into an event directing team which has toured area venues in DeKalb and Kane County since. Their events typically feature a running story-line, along with exclusive live musical performances, and guest hosts, along with theatrical segments.

Wooden Box Theater appearing in ‘Hypnotizame: Beatles Night at the Ellwood House’ will be held October 26th at inside the Ellwood House Visitors Center located at 509 N. First st in DeKalb. Admission is $5 and open to the public. For more information visit: https://www.facebook.com/events/1191569647684864/