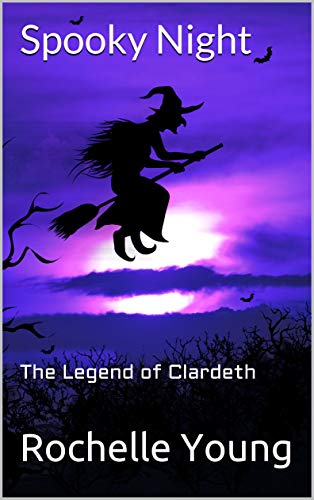 Chicago native, Rochelle Young, whose daughter lives in Sycamore, Illinois, had always been good at doing voices as she read stories to her daughter and, later, her grandkids.

“My friends always told me, ‘You should go into voiceover, because you’ve got all these voices,’” said Young.

Several years ago, she posted a skit on Youtube that got a lot of views. Young was so overwhelmed by the attention that she shut down her Youtube account.
When she became an empty nester after her daughter moved away to attend Northern Illinois University, Young started feeling lonely and began to write. The first thing she took up was a continuation of the story from her Youtube skit.

“Spooky Night: The Legend of Clardeth” (2018) follows a brother and sister on an adventure, as they battle a witch who moves into their neighborhood. The story takes place right before and during Halloween.

Young grew up watching old creature features on TV and is a huge fan of the “Son of Svengooli” show. She used to write a lot when she attended South Shore High School in Chicago, and said she was influenced by her English teacher, Larry Shapiro, who got her into creative writing.

“So that’s always been a part of me,” said Young. But with work and raising a daughter, she let her writing talents lay dormant for many years. “When I told my daughter I wrote a book, she was shocked,” said Young. She said it made her happy and proud when her daughter read the book and liked it.

“Spooky Night” has received many positive reviews on Amazon.com. “I like kids, so I wanted to make something that they could read,” said Young. She just wants kids to enjoy her story and would love for it to get more exposure.

As an added bonus, at the end of the book there is a recipe for a stew that the witch, Clardeth, makes in the story. It turns out that it’s an old family recipe of Young’s that you can actually make and eat.

There is not yet an audio version of “Spooky Night,” but Young said she definitely wants to make one. She plans to keep writing, and has already started her second book, which will pick up where “Spooky Night” left off. She also continues to do voiceover work, which you can hear samples of at Rochellesvoices.com.