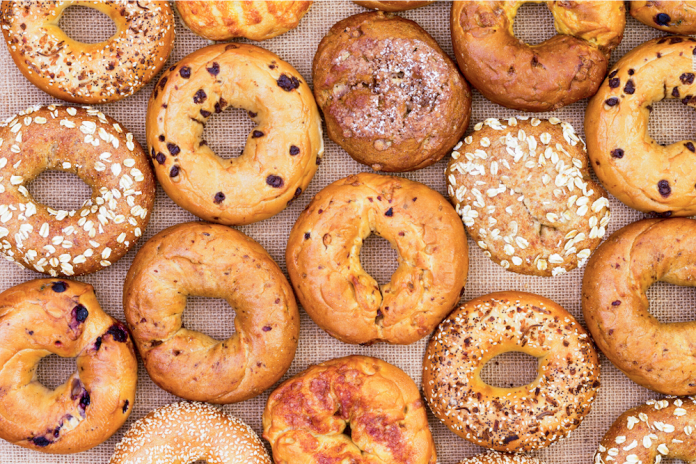 It’s National Bagel Day! Bagels have a long and highly documented history that travels from the Jewish families of Poland in the 1600s to wrapped up in parchment paper in your hands today. Unlike many things created nearly five-hundred years ago, bagels are remarkably unchanged. Sure, cream cheeses and butters and flavors and toppings may have evolved over time but bagel is a beigel is a beygal.

Bagels made the jump to America with a massive Polish-Jewish immigration in the 1800s that firmly entrenched itself in New York City where it thrived. In fact, an entire union was created in the early 1900s called Bagel Bakers Local 338 to support the growing, immigrant-led industry.

Automated production of bagels debuted in 1962 at Lender’s Bagel Bakery in New Haven, Connecticut—helped popularize them nationally. Bagels were in the ascendancy during the latter end of the twentieth century; sales rose in the 1980s and doubled by 1993. However, there was a small drop in their popularity at the beginning of the twenty-first century. Still, they remain very popular throughout the world, especially in the United States, Canada, and the United Kingdom.

Two of the most popular varieties of bagels are the Montreal and New York styles. The Montreal has malt and sugar, but no salt; it is boiled in honey-sweetened water, and is always baked in a wood-fired oven. The New York has salt and malt, and is boiled in water before being baked in a standard oven. It isn’t as sweet as the Montreal, and it has a smaller hole.

These days plain bagels are the most popular type of bagel, followed by sesame bagels. Other popular types have onion flakes, poppy seeds, or fruit such as blueberries or raisins.

Whether you take yours smothered in melted butter, doused in jelly, or simply topped with a load of classic cream cheese go out and get yourself a delicious bagel today.

Some business’ offer deals or freebies on National Bagel Day. Contact your local bagel shop for information on any promos.