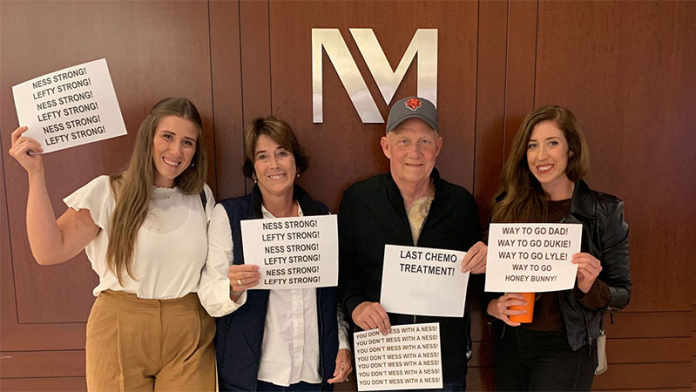 Lyle had never had a headache in his 66 years of life. But as he was getting ready to retire from his occupation as a steel mill worker after 46 years, he started suffering headaches that wouldn’t quit. A local physician told him they were related to stress and the lifestyle changes associated with retirement.

A five-week vacation to Costa Rica seemed like the perfect antidote. It was one of many places Lyle and his wife Evelyn planned to explore during their new chapter of life together. But the headaches came home with them.

Lyle’s next destination was Northwestern Medicine. Almost immediately, his physician noticed a large bulge in his neck. Lyle was diagnosed with diffused large B lymphoma. Lyle needed to start chemotherapy, but the cancer had eroded into his airway and esophagus, making it difficult for him to eat or breathe, and causing him to choke on his own saliva.

“I had just retired and wanted to enjoy time with my wife, daughters and grandkids,” says Lyle. “I love to golf, fish and hunt, and enjoy time boating at my lake house with family. I’d do whatever it takes to beat this because I want to see my daughters settled down and my grandkids grown up.”

Ankit Bharat, MD, chief of thoracic surgery at Northwestern Memorial Hospital, performed a rare surgical procedure — the first of its kind — that enabled Lyle to undergo chemotherapy. He disconnected Lyle’s esophagus from his throat and stomach, and redirected it to the outside of his neck to drain saliva into a bag. Since Lyle’s food pipe and wind pipe were fused together from cancer, Dr. Bharat repaired his wind pipe using a piece of Lyle’s latissimus dorsi, the muscle in your upper body you use to do pullups, and part of a vein from Lyle’s chest cavity.

“The procedure was risky, but Lyle had no other treatment options, and he and his family were on board,” says Dr. Bharat. “Our team worked hard to provide them with hope through innovation.”

Since the conduit between his mouth and his stomach was detached, Lyle was unable to eat solid foods. Yet, this procedure allowed him to complete several rounds of chemotherapy under the care of Northwestern Medicine Medical Oncologist Barbara Pro, MD.

Nine months later, Lyle was in remission. It was time to get his insides in order. Dr. Bharat created a tube out of part of Lyle’s stomach, and pulled it behind his breast bone and in front of his heart to connect to what was left of his esophagus.

After his second surgery, Lyle spent a month in the hospital before going through rehabilitation to regain his strength. When he was discharged from the hospital, he continued to build his strength by taking long walks in the backyard with his wife, daughters and grandchildren by his side.

“My dad wasn’t just battling cancer. He was battling the aftermath of a rare surgical procedure with unforeseen setbacks and unbelievable triumphs,” says Lyle’s daughter Mackenzie. “He showed a kind of bravery I’ve never seen before. He is a warrior.”

After almost a year of perseverance and not being able to eat solid foods, Lyle lost 50 pounds. He returned to the table during the best time of year for it: The holiday season.

His first long-awaited bites were with his wife, three daughters, two sons-in-law and two grandchildren.

“Patients with Lyle’s condition, a non-survivable malignant tracheoesophageal fistula, typically have a life expectancy of less than four to six weeks,” says Dr. Bharat. “I’m quite happy that with our clinical innovation and multidisciplinary approach, we were able to save Lyle’s life.”

Indeed, Lyle and his family have a lot to be thankful for.

“The Northwestern Medicine physicians are heads above anything I’ve ever imagined,” says Lyle. “It’s been an eye-opening experience about how good medical care can be.”