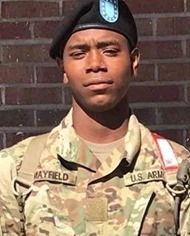 Henry Mayfield Jr., a United States Army Specialist from Chicago’s southern suburb of Hazel Crest (IL), was killed when a militant based group attacked a military airbase in Kenya early Sunday morning. He was assigned to the 1st Battalion, 58th Aviation Regiment and had only been in Kenya for two months.

23-year-old Mayfield Jr. was one of three people killed in an early morning attack on Manda Bay Airfield. Two Defense Department contractors were also killed in the attack, according to U.S. Pentagon officials.

After graduating from Hillcrest High School (2016) and attending Northern Illinois University Mayfield joined the Army. Mayfield enlisted in June 2018 and graduated from basic training in October of that year. After basic, he attended a special training program.

Mayfield was killed during an assault by a group linked to Al-Qaeda. The group known as Al-Shabab claimed responsibility for the attack, but the U.S. Pentagon has not yet confirmed their involvement. The Al-Shabab group is based in neighboring Somalia and has launched several attacks in Kenya in recent months. In return, the group has been targeted by numerous U.S. military airstrikes. The U.S. Army has about 120 military members assigned to the Manda Bay Airfield.