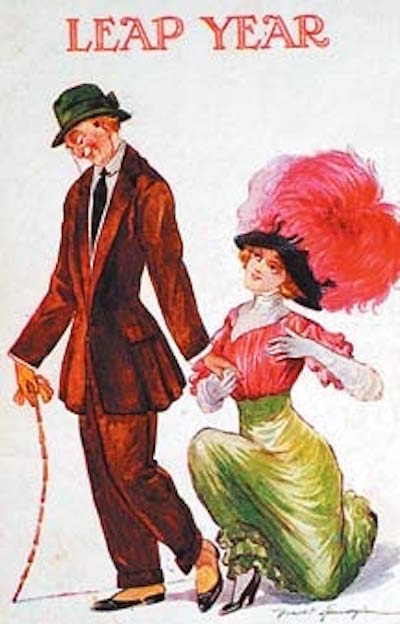 Leap Day and Leap Year happen every four years on February 29. One of the most well-known leap day traditions is that women can propose to their boyfriends, instead of the traditional way around. If you are that gutsy lady that feels it is time to make him commit, you may win a prize (see below).

The right of every woman to propose on 29th February each leap year goes back hundreds of years when the leap year day had no recognition in English law (the day was ‘leapt over’ and ignored, hence the term ‘leap year’). It is believed this tradition was started in 5th century Ireland when St. Bridget complained to St. Patrick about women having to wait for so long for a man to propose. As with many Irish legends, Saint Patrick turned her advances down, but gave her a silk gown as compensation. The Irish still consider Leap Day lucky and keep the tradition of women proposing on February 29 alive.

However, some European countries hold Leap Day superstitions that February 29 brings bad luck. Such cases can be seen in Scotland, Greece, and Italy. In Scotland, the legend dates back to 1288 when Queen Margaret allegedly enacted a law allowing women to propose on Leap Day if they wore a red petticoat to warn her suitor of a proposal. This may be one of the reasons why Scottish men began wearing kilts so they could run faster.

The Greeks also consider Leap Day and the entire year to be bad luck, especially when it comes to marriage. Because of this, engaged couples will wait until leap year passes to say their vows. Like the Greeks, in Italy, Leap Day superstitions advise against buying a house or a car and waiting until the next year to avoid bad luck. Multiple countries also consider having a child during leap year bad luck and say the child will be difficult to raise.

Special Prize: If you (the lady) propose to your significant other on Leap day (February 29), send the proposal story and photo to info@FunMEevents.com and you may win a $100.00 gift certificate for a pre-wedding day dinner/party.