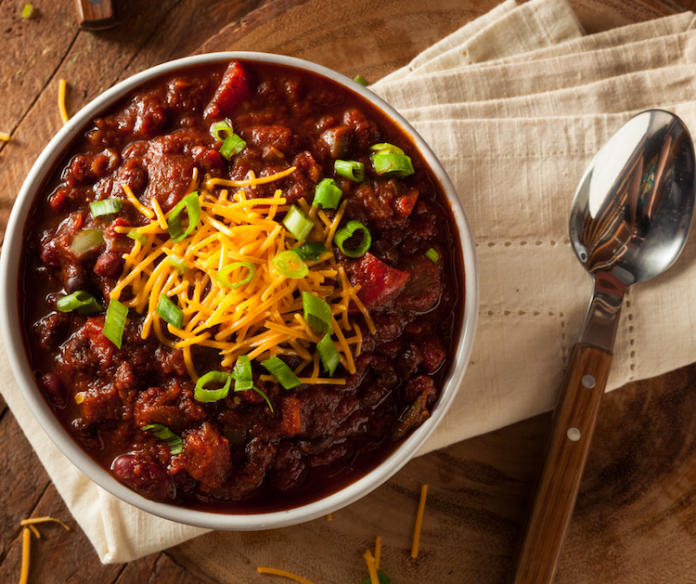 National Chili Day on the fourth Thursday in February honors one of America’s favorite winter dishes–chili.

Chili is most commonly made up of tomatoes, beans, chili peppers, meat, garlic, onions, and cumin.  However, cooks offer up many variations to the basic chili recipe. And, with so many varieties, chili cook-off competitions love to feature chili as a favored entry.

Chili is the ultimate people-pleaser and it’s also the ultimate cook-off dish. Family recipes are guarded like crown jewels, and secret ingredients are never spoken of above a whisper. And the debates about what makes true chili — beans or no beans? —are real! But these are all part of what makes chili such an experience.

Despite popular belief, chili does not come from Mexico. The recipe has certainly been influenced by Mexican culture, but it also incorporates elements from Native American and Spanish culinary traditions. Many historians believe chili originated in Texas where all three of these cultures intersected. This claim is supported by the fact that the first-ever written reference to chili occurred in San Antonio in 1828.

Rich Kelly of Hard Times Cafe in Arlington, VA founded National Chili Day. The day has been celebrated with cook-offs, pot lucks, feeds and bottomless bowls since at least 2006.

There are many ways that people enjoy the great taste of chili, some of which include:

Some like it hot, some like it mild, some like it on top of a baked potato and some prefer it without beans – but however you like it, Chilli Day is the perfect excuse for millions of spicy food fans all around the world to chow down on a bowl of the fiery favorite.

Want to make your own chili? Here’s a recipe https://www.thewholesomedish.com/the-best-classic-chili/