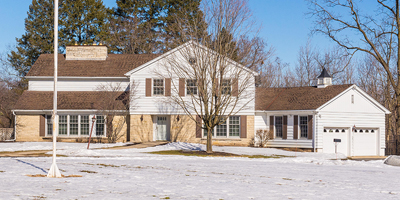 According to the Real Estate agent listing the former home for the Northern Illinois University President, the property has a verbal offer and waiting on a final signature for the completion of the sale. The listing price of $295,000 is $15,000 above the Zestimate® value. The final selling price has not been posted. Because the home is state property, there are many legal concerns with the transfer.

The home is located at 901 Woodlawn Drive in Dekalb, IL. Built as an entertainment luxury home for local DeKalb socialites, the property has many social amenities for entertaining. This 3 bedroom, 5 bathroom house includes 6,000 square feet of living space and sits on 1.3 acres that include a sweeping outdoor entertaining space.

The property has no previous tax information as it was part of the University and as state property not assigned a tax value. Similar homes of this size in the highly taxed DeKalb County should be approximately $12,000 or more.

This home had a political turmoil period during the Presidency of NIU President Clyde Wingfield (1985-86).  Former NIU president Clyde Wingfield planned to take $100,000 of university money and use it on the renovation of his state-owned house.  Illinois state laws required state approval to schedule any projects that exceed $20,000.  Wingfield became embattled with the NIU College Newspaper (The Northern Star) which according to many media sources lead to Wingfield’s short tenure of 10 months. Wingfield died in 2011 at age 80 at his home in Dallas, Texas.