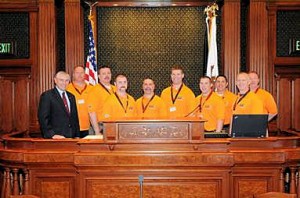 · Anti-Business Bills Continue to Pass in the House

· Encourage Your Friends to Attend These Free Seminars

· A Tribute Worth Remembering

The FY2013 budget was crafted with a revenue estimate that was on the low side in hopes that any amount over that level would be used to pay the backlog of bills. The legislature’s Commission on Government Forecasting and Accountability (COGFA) reported last week that indeed, after three quarters of the year, state revenue will likely be $1.3 billion more than budgeted.

The Comptroller confirmed that the flow of revenue has allowed her office to pay down the $9 billion backlog of debt with vendors and service providers. Medicaid bills are now paid in a timelier manner. She cautions, however, that many agencies have not reduced their spending to live within their budget and will likely run out of money before the end of the year.

According to COGFA, the unexpected influx of tax revenue is primarily the result of businesses and individual taxpayers taking actions in 2012 to avoid higher federal taxes that took effect on January 1st. The agency notes that sales tax receipts are still sluggish (up only 1 percent from this time last year) and unemployment remains at 9.5 percent—the second highest rate nationally.

Because the increased state revenue was due to a one-time windfall, COGFA cautions the legislature that it still has an underlying problem of spending outpacing revenues. To prove their point they point out the legislature has already approved supplemental appropriations to pay for child care and care to keep seniors living in their homes. The legislature will soon consider additional spending for union pay increases and services to the developmentally disabled. The Governor appears to be orchestrating spending so that popular programs receive supplemental funding and overall spending continues to outpace revenue.

The Senate easily passed SB2404 last week, a union-backed bill that would trim the state’s pension obligations to workers by about $46 billion over 30 years. The chamber also sent signals to the House that it was unlikely to consider the House amendments to the earlier Senate pension bill—SB 1.

I was encouraged to see passage of a bill that was crafted with input from most of the affected parties. To me, that seems a more certain path to pension reform than passing a bill that clearly is unconstitutional and without such input. The question now is whether Speaker Madigan will allow SB2404 to be debated as is or, like SB1, face another series of amendments.

One possible amendment could be a shift in annual pension payments from the state to local employers—schools, colleges and universities. Speaker Madigan conducted the first of several planned hearings on this issue last week. It was clear that he favors a shift in annual pension costs of nearly $2 billion which would ease the state’s budget problems but create even more financial problems for the local employers.

Speaker Madigan asked school and university representatives at the hearing to come back this week with specific suggestions that would make the cost shift less impactful on their operations. I have asked school superintendents in my district for their ideas too, since this proposal has been rumored for months. Some responses include a slow shift so the impact can be worked into the budget, more flexibility for districts to ignore unfunded state mandates, ability to tax for pensions like other units of local government, and full-funding of education by the state.

Last week fire fighters from across Illinois came to the Capitol for discussions with legislators and to attend the 20th Annual Fire Fighter Medal of Honor Awards Ceremony and Fallen Fire Fighter Memorial Service. I enjoyed the chance to visit with fire fighters from DeKalb and Sycamore and discuss the challenges they face as first responders. These brave men and women put themselves in harm’s way on a regular basis and I can’t thank them enough for their service.

The annual gaming expansion bill (this time SB1739) that narrowly passed out of the Senate on May 1 is working its way through the House. As usual it contains more casinos, additional gaming-positions, electronic gaming at horse racetracks and promises of additional state revenue.

This year’s legislation has additional support from cash strapped Chicago and Governor Quinn, who has been generally opposed to gaming expansion. A great deal of the money generated by the proposed expansion would be diverted away from important budgetary areas like education, pension stabilization and the repayment of overdue bills.

I am concerned with the optimistic revenue estimates since people only have so much money for gambling recreation and they have a lot more local and on-line gambling choices today. Further, any revenue should be used for state priorities, not pork to buy legislative votes or new state programs.

Anti-Business Bills Continue to Pass in the House

With unemployment in Illinois among the highest in the country and business retention a growing problem, the majority party in Springfield continues to pass partisan, anti-business bills that threaten our State’s economic recovery and future vitality. Here are some examples:

HB 922 – Extends from 3 to 10 years the amount of time contractors must keep payroll and other records when they are engaging in public works projects.

HB 923 – Requires most non-union contractors to report all payments made to an individual, sole proprietor or partnership doing work for the contractor even if they are not classified as an employee of the contractor.

HB 924 – Requires contractors and subcontractors on public works projects to comply with “responsible bidder” regulations and provide apprenticeship training programs. Many non-union businesses do not participate in such programs and will consequently be ineligible to bid for the projects. Many believe this will significantly increase the cost of public projects and Kane County recently had a situation that supports this conclusion.

HB 2649 – Essentially “pierces the corporate veil” by providing that any officer of a corporation who knowingly violates the Employee Classification Act to be held individually liable for violations and penalties assessed by the Dept. of Labor.

HB1336 – This bill to reform the EDGE tax credit program was not allowed to come to a vote in the House. The current business incentive program has been called among the worst nationally for transparency, accountability and results for dollars invested. The bill would have made the program more accessible to small businesses, made cost-per-job created a key metric to awards, capped the credit per project, and created an independent bipartisan oversight board.

SB1924 – I sponsored this bill in the House to encourage the purchase and development of the hundreds of foreclosed subdivisions in our area. Currently, when someone buys a foreclosed subdivision from the bank, the property assessment immediately increases from lower farmland values to higher residential assessments. Developers tell me they can’t afford the higher taxes while financing the construction of homes and waiting for the developed property to sell. The bill which would have given a pathway to developing dormant projects and adding hundreds of thousands of dollars for local schools was not allowed to even be debated in the House.

Encourage Your Friends to Attend These Free Seminars

Starting Saturday, there will be a week-long discussion of how we can be $marter with Money. The activities are organized by the Kishwaukee United Way and DeKalb County Cash Coalition to make better money managers of us all, regardless of our age. The 18 sessions from May 18 to 23 will range from raising money-smart kids to job-hunting and planning for retirement.

The Voluntary Action Center (815-758-6641) is offering rides to the sessions which are being held at various locations around DeKalb. Call the United Way for further details (815-756-7522) or find the schedule on my web site www.PritchardStateRep.com. 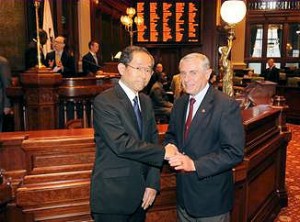 With all the focus on American companies leaving our state, it was reassuring last week to hear Masharu Yoshida, the Consul General of Japan at Chicago, tell the legislature that companies from his country were creating jobs in Illinois. He said Japanese companies provide 38,000 jobs in Illinois, including hundreds at the Nippon Sharyo plant, located in Rochelle. Yoshida was in Rochelle May 1 for a ribbon cutting ceremony to expand the rail-car facility. He told the legislature that Illinois was a fertile market because of its extensive transportation, top quality workforce and favorable business opportunities. He said that Japan and the U.S. are working together for economic growth.

In my last newsletter I mentioned efforts to stop welfare payments to people in jail and this past week we learned that 22,000 prisoners have also been receiving $38 million in unemployment checks. The Department of Employment Security (IDES) has announced it is now cross checking unemployment rolls against lists of people convicted of crimes and serving time.

A group of legislators requested an investigation into the misuse of unemployment payments and has sponsored legislation to require such cross-checks. As I have said many times, our government agencies could save millions of dollars by looking for fraud and improving operating efficiencies.

A Tribute Worth Remembering

As I was looking for Mother’s Day cards recently, I came across a poem written by Helen Steiner Rice that I’d like to share. Titled “A Mother’s Love,” it is a tribute worth remembering.

A Mother’s love is something that no one can explain, It is made of deep devotion and of sacrifice and pain; It is endless and unselfish and enduring come what may, For nothing can destroy it or take that love away.

It is patient and forgiving when all others are forsaking, And it never fails or falters even though the heart is breaking; It believes beyond believing when the world around condemns, And it glows with all the beauty of the rarest, brightest gems.

It is far beyond defining, it defies all explanation, And it still remains a secret like the mysteries of creation; A many splendored miracle man cannot understand And (she is) another wondrous evidence of God’s tender guiding hand. Blessing to all the moms!