Pension Reform Will Be Tested in Court
The muscle of legislative leaders and the Governor was flexed last Tuesday as the General Assembly approved state employee pension reform and the Governor quickly signed SB1 into law.  It is rumored that at least one union will file a court case to test the law’s constitutionality.  You can read the law at www.ilga.gov and type in SB1, then select Public Act 98-0599.

The courts will rule on the constitutionality of the law but I firmly believe it is unfair and morally wrong for the state, on its own, to renege on a promised employee benefit retrospectively.  As the preamble to the bill states, Illinois is in a dire fiscal situation but it is at the making of the legislature, not employees.

During debate, the bill’s sponsor admitted that the projected cost savings had not been reviewed by any objective actuarial but even using the numbers presented, this measure is really only a stop-gap to our fiscal problems.  This law is projected to reduce the unfunded liability from $100 billion to $80 billion which was termed a crisis level in 2011.  In addition, the bill only provides that 10 percent of the annual cost savings goes to reduce the pension debt.  We should be using all the cost savings to reduce the debt as quickly as possible.

Pension payments are only expected to be lowered by $1.5 billion per year which means they will still consume about 20 percent of annual General Revenue Funds through 2035.  Payments at this level will continue to crowd out other state priorities in the budget.

Another shortfall of the legislation is the weak assurances of state pension payments.  The legislature has found ways to avoid their pension payments in the past and can easily do so again without the proper classification of this debt.

I want to thank all those who took the time to send me their thoughts on the reform plan.  I have tried to represent those opinions in the debate and my vote.  More pension reforms are expected in the next months of legislative session so continue to follow this issue-it is not resolved.

Local Teacher Earns National Recognition
I had the pleasure of attending a surprise presentation of the Milken National Educator Award to Melissa Leisner, an English and Reading Teacher at Prairie Knolls Middle School, Burlington School District 301.  The award, known as the “Oscar in Teaching,” was presented to only 40 educators in the entire nation this year and Melissa is the only recipient from Illinois. 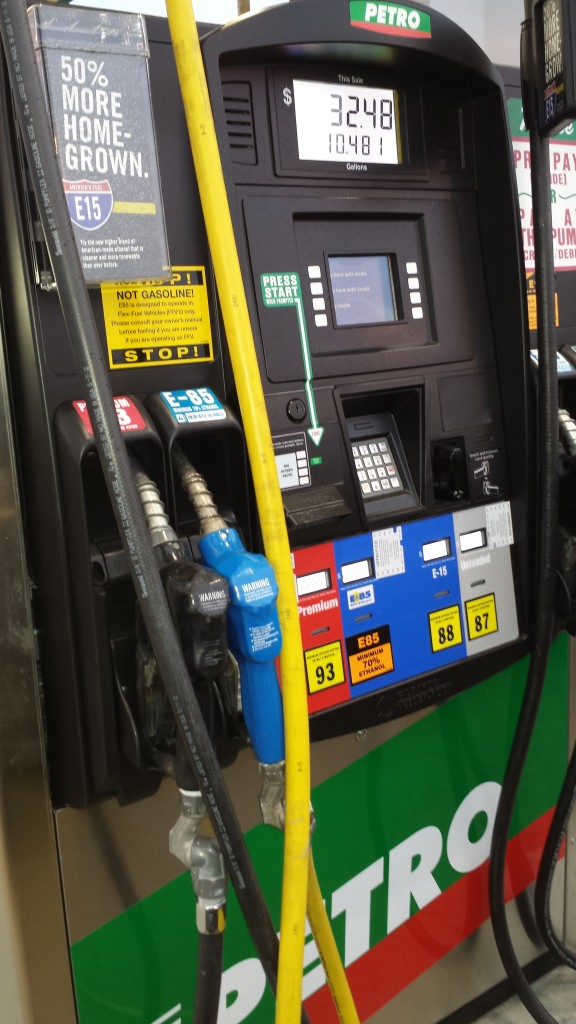 Several weeks ago Illinois River Energy teamed up with the Petro TravelPlaza-both in Rochelle–to begin offering E15 fuel locally.  The higher blend of ethanol in gasoline (15 percent ethanol, 85 percent gasoline) has been available nationally for more than 16 months but was not sold in our region.

This higher level blend is approved by the Environmental Protection Agency (EPA) for vehicles manufactured in 2001 and newer, and is the most tested fuel in EPA approval history with test vehicles driven more than 45 million miles.

The use of ethanol blends saved consumers on average $1.00 per gallon at the pump in 2012 and 2013.  The creation of the new fuel blend reportedly has led to the creation of 87,000 new jobs and has reduced America’s foreign oil dependence to 41 percent, compared to 48 percent without ethanol.

Advisory Council Talks about Educational Issues
My Education Advisory Council had a lively discussion last week talking about school issues and providing me with feedback I can use in Springfield.  Obviously pension reform was a hot topic and the likelihood of further reforms– like shifting the funding of pensions to the local level-that many expect to be debated next spring.

Then I painted a picture for education funding next year that will be influenced by a scheduled roll-back in the income tax, pension payments that will not be reduced by recent reforms until 2016, and expanding Medicaid payments.  The legislature could be looking at revenues next year that are $2 billion less than this year.

We also reviewed the new state-wide interactive school report cards that have been revised to be easier to read and understand how students in individual buildings are performing.  Marilyn Bellert, Associate Director for the P-20 Center at Northern Illinois University, demonstrated the differences in the new and old reports.

The new, online Illinois Report Card (shown above) was developed at NIU over the past year by staff of the Illinois Interactive Report Card.  Designed to provide parents with information that they can use to work effectively with their schools, the new report card can be accessed at www.illinoisreportcard.com.  More than 100,000 visitors checked out the new report card in November.

Finally, I reviewed some of the concepts the Senate Education Funding Task Force is considering that may impact state school equalization funding next spring.  The committee has been gathering recommendations from numerous groups and experts over the past few months and is focusing on changes to PTELL (tax cap) adjustments, low income grants, block grants, and mandated categorical funding.

If you would like join my Education Advisory Council and participate in the discussions with parents, teachers, administrators and taxpayers; contact my office.

Free Tax Return Preparation Available for Military Personnel
The Illinois CPA Society has partnered with the Internal Revenue Service to offer free personal income tax return filing assistance to members of the U.S. armed forces and their families.  The Military Service Tax Preparation Project is available to members of the armed forces who have recently returned or are still serving on active duty in a combat zone or qualified hazardous duty area.

Through the program, military personnel and their family members are matched with CPA volunteers from their area who provide free personal, federal and state income tax preparation assistance.  They can help our military personnel take full advantage of tax benefits, exclusions and filling and payment extensions available to them.  Those interested in receiving this assistance should register online at www.icpas.org/militarytaxrequest.