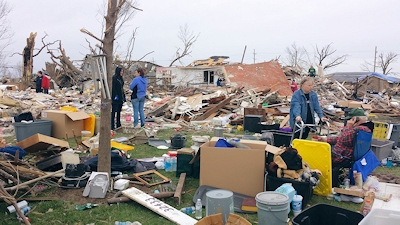 It’s amazing what hundreds of volunteers can accomplish in a week. The small community of Fairdale was a beehive of activity as Governor Rauner, Senator Syverson, Representative Keith Wheeler and I visited last Friday, just one week after an F4 tornado slammed through the area. The financial generosity, volunteering to clean up, and donation of equipment and items of all sorts to help someone in trouble are classic American culture.
As we know by now just in the town of Fairdale, 34 homes were destroyed, 16 suffered major damage, and another 22 suffered minor damage. Two people lost their lives– Jacqueline Klosa and Geraldine Schultz, a dear friend. They are being remembered as loving, caring “neighbors” so typical of this community. 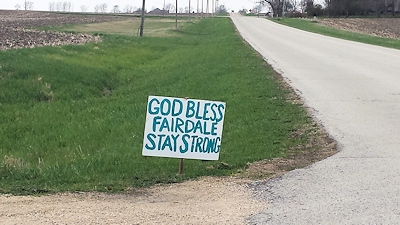 While the area was declared a state disaster, no federal aid and only modest state grants are expected. The Governor believes that the recovery can be fully funded by private donations and he gave $100,000 to relief efforts as an example. State Comptroller Leslie Munger reminds state employees and retirees that they can donate a portion of their paychecks to the Red Cross’s disaster relief efforts for the victims through a convenient website. Simply click the link and follow the instructions. 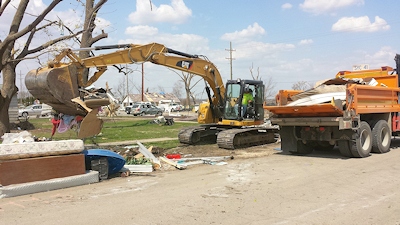 We are learning the stages that people go through in a major natural disaster: relief, response, recovery and rebuilding. Taking lessons from other regions affected by natural disaster, DeKalb County has formed a Long Term Recovery Committee (LTR) that will function for years to help people rebuild their lives and homes. Lead by the DeKalb County Community Foundation and the Kishwaukee United Way, the LTR will collect tax deductible financial donations, assure transparent accountability for their use, simplify case management for the victims, and assign LTR member organizations different tasks to help victims. LTRs have proven invaluable to provide the unmet needs of victims, especially after insurance and government aid run out.

Visit the Village of Kirkland website for updates and to find out what you can do to help. I want to express my sincere appreciation for all those who have been so generous with their time and resources. I am always blown away by the way our state comes together to help those in need. 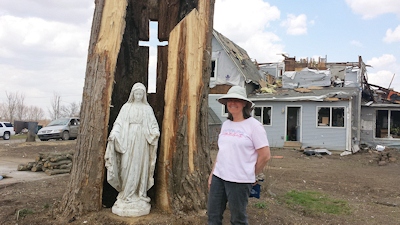 Tornado Property Tax Relief
Following the tornadoes that struck Illinois in 2012 and 2013, legislation was passed to provide property tax relief for affected businesses and families after they rebuild. The Natural Disaster Homestead Exemption creates an assessment freeze for properties containing a residential structure that has been rebuilt following a natural disaster. Rebuilt structures must be completed within two years of the disaster and be no larger than 110 percent of the original structure. The assessment freeze continues at the same amount until the taxable year in which the property is sold or transferred.

Another change to the Property Tax Code provides a tax abatement for commercial and industrial property that is damaged by a tornado. The abatement diminishes each year for 15 years. Laws like these help spur the rebuilding effort, as owners don’t have to fear property tax spikes. Visit with your County Assessor for more details.

Legislative Update
The Speaker has set this week as the deadline to pass House bills out of the chamber so there will be long hours of debate for the 400 or so bills awaiting action. Bills passed last week were mostly non-controversial. Here are a few highlights.

HB 1446 provides the guidelines by which a person who has had their driving license revoked for multiple “driving under the influence” offenses (DUIs) may obtain the right to drive again. This bill was an initiative of the Illinois State Bar Association, Mothers Against Drunk Driving (MADD), and the Alliance Against Intoxicated Motorists. These groups argued that a lifetime revocation is too harsh for those who have been rehabilitated and for many people who want to work and need transportation to get to the job.

HB 152 requires public schools to install carbon monoxide alarms where ever there is open combustion just like the current law for residential homes. The alarms can be inexpensive battery operated units and paid with life-safety or other funds.

HB1335, colloquially known as the “Right to Try” Act, allows terminally ill patients to use unapproved medications. Patients who have exhausted all other treatment options and have only a short time to live can “try” drugs still in their clinical trials. The normal Food and Drug Administration (FDA) drug approval process takes years. Eligible drugs must have successfully passed Phase 1 testing, but have not yet been approved for general use.
HB303 amends the Illinois Freedom of Information Act by banning a government body from concealing the terms of a severance agreement funded by tax-payer dollars. The bill provides protection for trade secrets, proprietary information, or other exempt information. The impetus for the bill comes from a generous severance agreement between the College of DuPage board and the College President which has been sealed.

HB3143, a bill I sponsored in response to an accident in the district, amends the vehicle code regarding seizures. Drivers would have to report to the Secretary of State any seizure among other medical conditions that would cause a loss of ability to safely operate a motor vehicle. In addition, the bill provides that a person who has experienced a loss of consciousness or a seizure within the past 6 months commits reckless driving if they drive without controlling the condition by medical treatment or medication.

HB208 tries to create a new image for the state by adding pumpkin pie to our long list of state symbols. According to the sponsor there is good reason to recognize the pumpkin since the state produces nearly 90 percent of the pumpkins grown for commercial sale in the United States. This pie is good for the economy and tourism, especially in the region around Peoria. 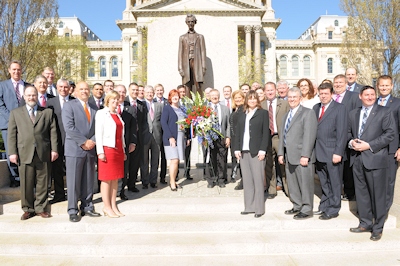 Last Wednesday was the 150th anniversary of President Abraham Lincoln’s death. A onetime state representative, Abe was honored on the House floor with speeches and remembrances of his impact upon the state and country.
Lincoln is Illinois’ most favorite son and consistently ranks in the top 3 of most respected presidents in history. He is a man who is remembered as having embodied the principles of this nation and who stuck by them despite fierce opposition and the country seemingly falling apart around him. His legacy lives on as the liberator of slaves and the savior of the Union.

While Lincoln was focused on the war yet he was instrumental in many other significant policies. He signed the Homestead Act which encouraged settlement of farms and increased food productivity. He signed the Morrill Act which created land grant public colleges like the University of Illinois to educate citizens for the industrial age. He was also instrumental in the first transcontinental railroad and the National Banking Act.

In preparation for the commemoration, I reread Lincoln’s second Presidential Inauguration Address and found some interesting correlation to our current state challenges. In the speech the President sought to explain the factors leading up to the Civil War, efforts to avoid it and reasons for the suffering and resulting pain. He asks if the war was the consequence for allowing slavery and concludes “The judgments of the Lord are true and righteous altogether.” I wonder if Lincoln would say our current financial pain, program cuts and deteriorating economy are judgments for years of irresponsible budgeting, over promising and misplaced priorities.

Lieutenant Governor Visits District
Over the past few weeks the Task Force on Local Government Consolidation and Mandate Reform continued to hold meetings and gathered input from local units of government including schools in my district. Lt. Governor Evelyn Sanguinetti talked with officials and students at Northern Illinois University and listened to comments from a sampling of local officials assembled to visit with her.
We discussed local examples of sharing services between units of government, sharing facilities and in general avoiding duplication of services. Many unfunded state mandates were discussed and the cost they add for local taxpayers. The Governor and Lt. Governor are dedicated to the cause of reducing waste, increasing efficiency and relieving the burden of property taxes.

New State Superintendent Appointed
A new State Superintendent of Education was selected by the State Board of Education last week and now must be confirmed by the Senate. Dr. Tony Smith, who assumes duties on May 1, brings considerable experience in education management in both the public and the private sector. He currently works as executive director of the Stone Foundation which awards grants for children’s development and education.
Smith has held a wide range of educational leadership roles, mostly in his native state of California, where he led the Oakland Unified School District. There he helped to improve academic outcomes, district finances, family engagement and organizational coherence during his four-year tenure.

Smith replaces Chris Koch, who served as State Superintendent since 2006 and is one of the nation’s longest serving chiefs. Koch has held various leadership roles at the state’s K-12 education agency for 21 years, many dealing with students with special needs.

I worked closely with Koch on many educational reforms including teacher and principal preparation and evaluation, learning standards, licensure and funding. He was very accessible, cooperative, and focused on student outcomes.

Have a great week; Spring has arrived, I think.