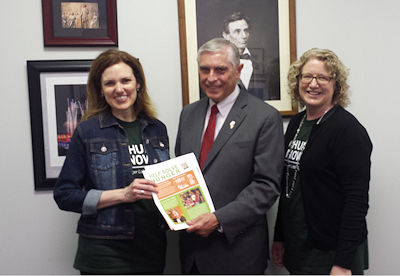 Representatives of the Northern Illinois Food Bank were in Springfield recently to talk about hunger in Illinois and the need for food banks and meal programs. Julie Yurko (left) and Dianne Korizon pointed out the 800 partner feeding programs that serve more than 71,000 hungry neighbors each week across their 13 county area. More than 300 retail partners donated 29.4 million pounds of food that would have otherwise gone to waste. One of those partners was Tyson Foods, who donated 262,000 pounds of food last year.
NI Food Bank and Tyson are teaming up to help provide 5 million meals to hungry kids this summer. Tyson will match up to $100,000 in donations. You can donate by clicking on the link above. Tyson has facilities across the state, including the distribution center in Rochelle, and has an economic impact of $878 million in the state.
Expanding Breakfast to those who need it most

Current Illinois law requires some schools to have a school breakfast program, but many students are still starting their day off hungry. According to Rise and Shine Illinois, our state is 42nd in providing kids with school breakfast.
I am sponsor of SB2393 in the House to expand school breakfast options. The bill requires schools with 70 percent or more low income students to provide a “Breakfast After the Bell” program. Traditional school breakfast programs serve breakfast before the start of the school day, requiring students to arrive to school early, which can be especially difficult for kids riding the bus. By offering breakfast after school starts, we can increase access to nutrition that can help students stay alert and learning throughout the school day.
School meal programs are almost entirely funded through federal grants and this bill could potentially bring in an additional $42 million in federal funding to Illinois schools. 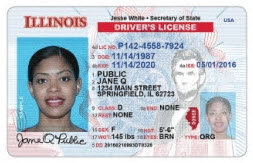 In an effort to comply with federal standards resulting from the REAL ID Act of 2005, Secretary of State Jesse White announced changes to Illinois State IDs and driver’s licenses. These new changes include security features that will help protect citizens from fraud and identity theft.

By the end of July, applicants visiting Driver Services facilities will no longer be issued a new permanent ID card at the end of the application process. Instead, an applicant’s information will be sent to a centralized, secure facility in Illinois. After fraud checks have been conducted to ensure the applicant’s identity, a higher quality, more secure ID will be printed and sent to the applicant’s home by U.S. mail within 15 business days. Applicants will leave the facility with a temporary paper driver’s license, which is valid for 45 days and will be able to serve for driving purposes and proof of identification. Click here for a step by step guide to the new process.
As a reminder, the Secretary of State announced last fall that his office would suspend mailing out vehicle registration renewal reminders due to the lack of a state budget. Check your vehicle plates for the expiration date and renew them at the local driver’s license facility. You may sign up to receive electronic notice and renew through the Secretary of State’s website. 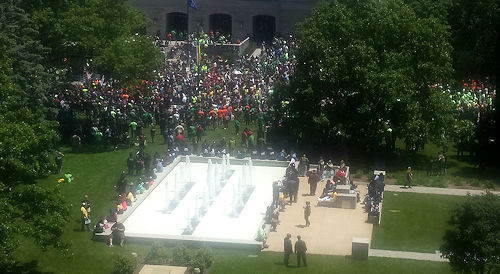 Thousands of union members, including some from the district, rallied in Springfield last week to protest Governor Rauner’s veto of a bill and to urge support for several wage-enhancing bills before the legislature. The House passed four labor bills, but delayed action on the over-ride vote until this week.
The bill vetoed by the Governor is House Bill 580, legislation that is nearly identical to a bill last year–Senate Bill 1229–which was also vetoed and the over-ride vote failed. The legislation would replace the agreed method of labor-management negotiations between the governor and AFSCME, the State’s largest public union. It also would interfere with Labor Relations Board fact finding and a pending court case.
HB 580 calls upon an arbitrator to select one or the other side’s last best offer. It would also appropriate pay increases won in negotiations several years ago, but never authorized by the legislature. The legislation is clearly the response to tough negotiating by the Governor and fear that the agreed negotiation process might go against the union.
Meanwhile, Governor Rauner reached agreement with yet another labor union representing teachers at the Illinois School for the Deaf in Jacksonville. Like over a dozen other unions, the teachers agreed to many of the cost-cutting contract elements that Governor Rauner has been seeking in negotiations with AFSCME including a 4 year wage freeze and a new incentive program for employees who implement cost saving measures or exceed productivity standards.

The House advanced four pieces of legislation last week that would raise wage rates for Service Employees International Union (SEIU) workers and others to $15 per hour. The bills would also codify into law provisions of current collective bargaining agreements between workers and the state.
The bills would mandate wages for home health care workers, childcare providers, and those that work with the disabled. Those that care for our neediest and most vulnerable citizens have incredibly difficult jobs and deserve to be fairly compensated for it.
This legislation, however, is the wrong way to go about it. Illinois does not set in law hourly rates for any other state employees. This attempt to circumvent the collective bargaining process could potentially set a precedent and open the floodgates for other state workers seeking raises. The bills in total are estimated to cost taxpayers around $1.5 billion.
HB5764 raises by nearly $1.1 billion the cost of providing services to the aging population. This bill provides wage increases for homemakers in the Community Care Program and higher rates for agencies that provide health insurance coverage.
HB5931 raises the wage rate for personnel in residential programs for the disabled by an estimated $330 million.
SB2536 raises the wage rate for non-relative providers in the child care program and provides compensation for required training. Annual cost to the state would be $30.3 million.
SB2931 provides home service program workers a wage increase, codifies current collective-bargaining agreements, and offers compensation for training. These benefits would cost the state $86.8 million.
The House has yet to adopt a revenue estimate and so is blindly approving spending authorization. Remember, there is no approved budget. Most likely we are simply adding to our list of unpaid bills that now cost the state about $1 billion in interest charges.

A few weeks ago the House passed a $600 million allocation for higher education with a designated source of funding. Last week HB 4167 passed the House adding another $227 million for grants to low-income students (MAP) from an already overextended General Revenue Fund. In essence the legislature is giving students an IOU and forcing them to wait in line for payment.
The state already has a backlog of unpaid bills totaling $7.15 billion so what’s another $227 million? Unfortunately the interest charges on these bills could be put to much better uses.

Senate Bill 2343 creating the Citizen Privacy Protection Act passed both chambers unanimously. The bill is an initiative of the American Civil Liberties Union to place restrictions on police surveillance technology that can capture the data from a person’s cell phone even if the person is not the target of an investigation.
The legislation requires law enforcement to obtain a warrant based on probable cause before using a cell site simulator. These simulators are devices that masquerade as a legitimate cell phone tower so that cell phones connect to them and reveal phone numbers, location and messages. The bill would also require law enforcement to delete any data the devices pick up from phones used by those who aren’t the target of an investigation.

For years prevailing minimum wages for public works projects have been developed by the Illinois Department of Labor (IDOL) based county or local wage surveys of common wages paid for public projects. Contractors are then required to pay union and non-union workers alike based on the prevailing wage rate for each type of work.
Senate Bill 2964 which passed the House preempts local costs and sets the prevailing wage rate at the level in collective bargaining agreements involving more than 30 percent of the workers in a county. Even when the majority of work is non-union or there may be no collective bargaining agreements in a county, the IDOL must set the rate. Although the exact fiscal impact of this bill is unknown, it will undoubtedly increase the cost of public works projects for both local governments and contractors.

The legislature will be in continuous session through May 31 during which time we will pass a budget. There have been no appropriation committee discussions of the budget or even agreement on the anticipated revenue as required by the constitution. I look for a budget the Speaker prepares that continues to under estimate spending in order to pass a budget that appears to be balanced, another requirement of the constitution.

While the legislature will be in session next Monday, take time to honor those who have given their lives for our freedom and democracy.