Today is the 75th Anniversary of D-Day, the date of the Allied landing operations in Normandy, France that led to the end of World War II.

By nightfall on June 6, Allied forces had established themselves in Normandy, though their position remained precarious. Casualties on D-Day numbered around 10,400 while the Germans incurred approximately 4,000-9,000. Over the next several days, Allied troops continued to press inland, while the Germans moved to contain the beachhead. These efforts were frustrated by Berlin’s reluctance to release reserve panzer divisions in France for fear that Allies would still attack at Pas de Calais. 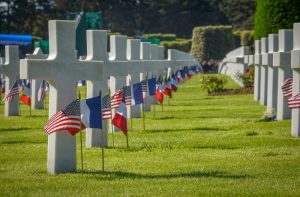 Upon landing, Allied forces pressed north to take the port of Cherbourg and south towards the city of Caen. As American troops fought their way north, they were hampered by the bocage (hedgerows) that crisscrossed the landscape. Ideal for defensive warfare, the bocage greatly slowed the American advance. Around Caen, British forces were engaged in a battle of attrition with the Germans. The situation did not change radically until the US First Army broke through the German lines at St. Lo on July 25 as part of Operation Cobra.

The Normandy American Cemetery and Memorial in France is located in Colleville-sur-Mer, on the site of the temporary American St. Laurent Cemetery. St. Laurent Cemetery was established by the U.S. First Army on June 8, 1944 as the first American cemetery on European soil in World War II. Overlooking Omaha Beach, the launching point of the U.S. invasion of Normandy, this cemetery contains the graves of 9,386 American soldiers who died at Normandy and a touching memorial to another 1,557 whose bodies were never recovered.

In 2016, local DeKalb American Legion member and former US Air Force Bandsman, Michael Embrey, was honored to play Taps at the American Cemetery at Normandy, France. This year, many former US, English and Canadian military veterans will be honored at both the various landing points in France.