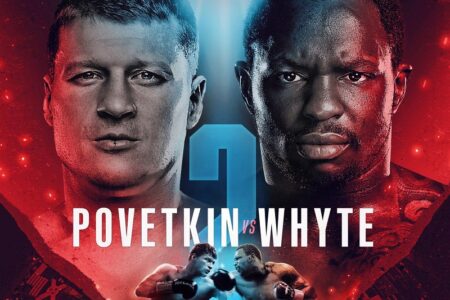 The DAZN team gives their picks for the return bout for the Interim WBC heavyweight championship.

Finally, after seven long months of waiting, Dillian Whyte’s do-or-die opportunity to avenge his surprising loss to Alexander Povetkin is upon us.

Whyte and Povetkin rematch their Fight Camp headliner from August this Saturday in Gilbraltar, with both the interim WBC title and mandatory challenger status to Tyson Fury’s belt at stake. Anything but a decisive victory for the Londoner will pretty much end his dreams of one day being called “heavyweight champion of the world”.

Whyte looked ready for the title picture in rounds 1-4 in promoter Eddie Hearn’s back garden, as he outworked, outpunched and outmanouvred Povetkin at every turn and scored two knockdowns. However, the Russian veteran proved the adages about having a “puncher’s chance” to be 100% correct when he lit Whyte up with a vicious uppercut from out of nowhere in the fifth to win by KO.

Will we see a renactment of the first four rounds, or of the eventual finish on Mar. 27?

Here’s what our boxing experts at DAZN News had to say.

LIAM HAPPE: WHYTE MUST STAY FOCUSED AND WAIT FOR STOPPAGE

The surprising nature of Povetkin’s victory last time out comes from just how much of a pasting he was taking up until round five. Whyte looked as good as he’d ever looked, if not better, and seemed certain to earn the TKO before the halfway point of the scheduled 12-rounder. He even had Povetkin down twice. However, that for me was what led to his downfall. Early on, Whyte was patient, focused and precise. After the second knockdown, he started to feel as though he needed to wrap this one up. As a result, deviated from what was working and left openings for the one-punch comeback. You have to expect Dillian will be able to overwhelm Povetkin in a similar manner this time around, but he cannot allow himself to be fooled into thinking he needs to move up in gears or add aggression. If he keeps his head screwed on, he will methodically pick the Russian apart without once having to leave his wheelhouse.

Dillian Whyte is confident that he is bringing something different to his fight with Alexander Povetkin, and Eddie Hearn suggests that he is going back to a nastier version of the boxer he once was. Whyte often says the right things and nobody can fault his enthusiasm for the sport, or his dedication to it. But he has come up against the hardest challenges a few times in his career and never quite gone far enough. This is probably his last chance, and everything is going for him. His opponent suffered a serious bout of the debilitating coronavirus, and he is now 41, well past almost every boxer and athlete’s prime. Whyte has the tools to win, but his Russian opponent could be tempted to box defensively, safe in the knowledge that he holds the advantage as the current belt holder. Whyte will probably win, but he is not the same favourite he was last time around.

STEVEN MUEHLHAUSEN: THIS TIME, POVETKIN WILL NOT GET UP

It’s not surprising that Whyte is a big favorite. The 32-year-old dominated the first 12 minutes of the first contest until the stoppage. He left his chin up, which gave Povetkin the opening he needed to put Whyte away. The sequel is Whyte’s fight to lose as the 41-year-old Povetkin has started showing his age in the last couple of years. He’s 2-1-1 in his previous four and has looked slower each time out. The last thing to go on a fighter is his power, which is why Povetkin is still a serious threat and is worth putting a little bit of money on. Yes, Povetkin stunned Anthony Joshua in their September 2018 heavyweight title fight and kept looking for the KO in his December 2019 clash with Michael Hunter that went to a draw and the same with Whyte. However, Whyte is going to fight smarter by using the jab to set up his power shots. This time, Whyte is going to connect and Povetkin will not get up, and “The Body Snatcher” will recapture the interim WBC belt.